On the Ice: Why Patrick Kane is the most exciting NHL Player 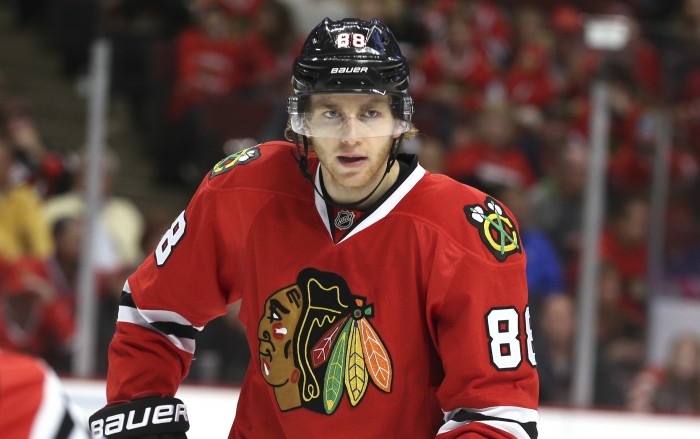 This past summer, Patrick Kane and Jonathan Toews signed identical eight-year $84 million deals to extend their partnership with Chicago Blackhawks.

From dazzling shootout goals, amazing puck handling, pin-point passes, vision and swagger, Kane has an IT factor unrivaled in the game today.

Kane has been in the NHL since 2007, where he was drafted first overall by the Blackhawks.

His first two years were productive seasons, securing 72 and 70 points. His third season was his breakout year pacing himself into the top 10 with a career-high 88 points.

Like the other big three professional sports, hockey is at its most thrilling during the playoffs, and the Stanley Cup Playoffs are where the best and brightest stars make their legacies.

Kane is one of those rare players who has the habit of making the stage his own.

In 2010, Kane’s third season, the Blackhawks made it to the Stanley Cup finals where they faced the Philadelphia Flyers. The Blackhawks were up 3-2 in the series and game six came down to overtime. Kane was on the left wing handling the puck, maneuvered by his defender, fired a shot and scored the game winning goal to win the Stanley Cup.

What’s so spectacular about the shot? How about the fact it appeared Kane was the only person in the arena who knew he scored, even the announcers were stunned. It seems like performing in big moments are what Kane thrives at best.

In the Blackhawks two Stanley Cup Championship wins, Kane had 28 and 19 points while constantly showing up in clutch situations with or without the puck.

In last year’s playoffs, Kane was once again sensational having a flare for the dramatic.

In game six of the Western Conference Semi-Finals, against the Minnesota Wild, the puck ends up on his stick and he makes a tremendous backhand shot in overtime to win the series. The goal was reminiscent of the Flyers game winning goal.

Certain players have an ability to always be nearby in those type of moments, so it was not a coincidence Kane made the play.

He did not stop there. The Blackhawks were now on a collision course to play their heated rivals, the Los Angeles Kings, in the Western Conference Finals for an opportunity at the Stanley Cup.

Kane not only struggled in the first four games of the series, but he had a shockingly noticeable one point and the Blackhawks were down 1-3 on the brink of elimination. Analysts and fans alike were criticizing his play, declaring the Blackhawks have no chance if Kane does not get more involved.

Not only was he more involved, but Kane was unstoppable. Game 5 was a double overtime classic where he made big play after big play proving his dominance. His presence on the ice helped set up the game winning goal by luring two defenders, giving his teammate a free lane to score. In games five and six he had a combined seven points.

This year, Kane leads the NHL in points (63) and is on pace to break his career high (88). At the rate he’s playing Kane could win his first individual award since garnering the Calder Trophy, rookie of the year, in 2008. He’s in contention to win his first Hart Trophy (the league MVP) and his first Art Ross Trophy (league leader in points).

The individual accolades would definitely boost his career resume. With only 24 games left in the regular season though, Kane’s real stage is awaiting. When the lights turn on and the pressure intensifies, as he would say it’s “Show Time”.