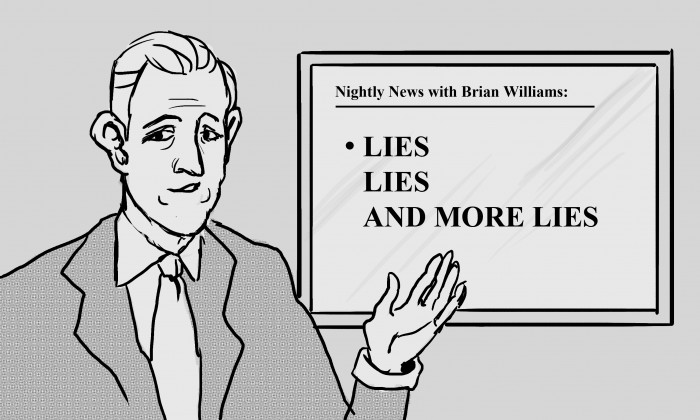 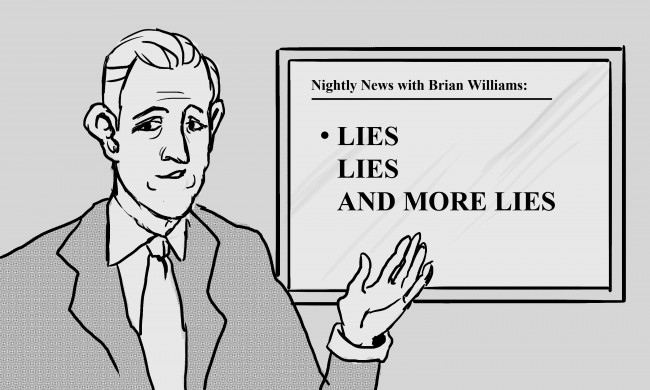 Unless you have been living under a rock the last two weeks, you’ve heard about NBC’s lead news anchor, Brian Williams’ unforgivable lies about his time in Iraq in the early 2000s. Specifically, in 2003, Williams claimed he was in a helicopter struck down in Iraq, but in fact, was not in said helicopter, he was behind it.

After the original statement was made, the trail of falsities continued. On CNN this week, more “new” information came out about Williams’ time as an embedded journalist. This includes the information that he was given a piece of shrapnel from the helicopter, that went down during the SEAL Team Six seizure and the killing of Osama Bin Laden back in May 2011.

The first question that comes to mind: No matter how relevant of a journalist you are, how on earth would you get a piece of a helicopter from a strictly classified mission, seeking to kill a terrorist? What Williams is telling the public is just bringing his credibility to rock bottom.

Why is credibility so necessary in journalism? We watch or read news everyday, no matter how technologically advanced this world has become. We have 24 hour news channels, although highly produced, they bring us the breaking news every minute of every day, no matter what it is happening in the world. We are supposed to be able to trust them, but when something like this happens, how can we?

As a journalism student, Williams’ actions, no matter if there’s any truth behind them, are a total joke. A journalist should know never to do that. The problem with people like Williams is that they have now become celebrities, but that does not mean they can tell lies—it only discredits them even further.

From day one, in any level journalism course, it is taught to be truthful, and to never make critical errors in your writing or reporting. We need truth in journalism in order to uphold the values we’re taught, and seeing someone as “credible” and powerful as Williams do this is absolutely unbelievable. Of course, he is not the first to tell fibs on air. I have seen and studied plenty of doctored photos in photojournalism classes, as well as many false news stories. I mean, who can forget the doctored image of John Kerry and Jane Fonda from the Vietnam era? There is no way anything of that nature should ever be passed as credible, and the general public realizes that, so that is why I believe NBC’s retaliation should be far more than just a suspension.

Viewers need trust and truth because similar to religion, news explains everything. Religion is a form of explanation, even if not believed by everyone. News is a daily reassurance to humans of what is happening around the world, and when one thing goes wrong, it is impossible to understand if things are true or not.

Yes, news may be a social construct to some point that keeps our daily lives entertaining, but people like Williams cannot make these mistakes and just go on without further punishment. I trusted his word, and I trust the words of many other journalists. The second the switch goes off and something is false, all credibility is lost, and that journalist becomes a target for constant joking and anger.

I believe what Williams did deserves more punishment, even termination.