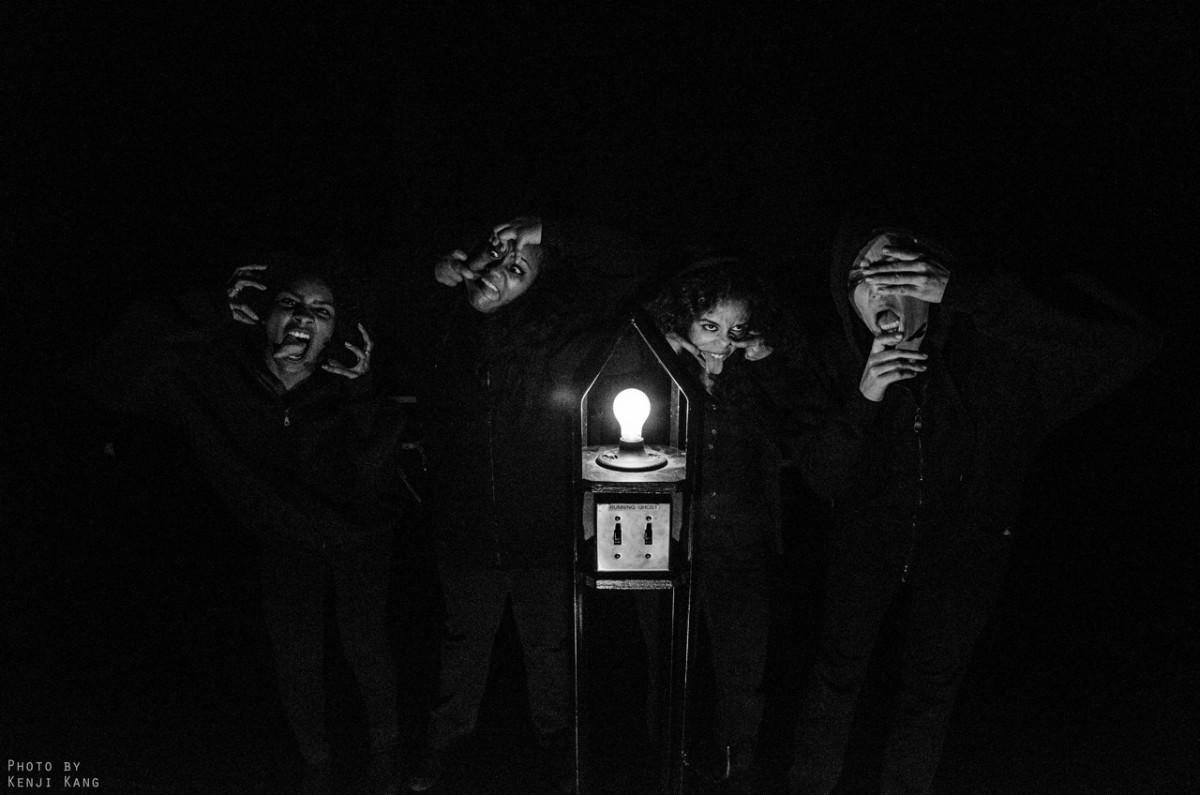 Friday the 13th was the perfect day to see the CSUN Theatre Department production of Shakespeare’s “Macbeth.” Witches, murder and an air of foreboding captivated the audience, as the story unfolded of the titular Scottish king and the bloody lengths he would go to in order keep his crown.

As the play began, it was the witches who set – and kept – the eerie tone for the evening. Angelina Finau, Heather Mermelstein, Jennifer Linares and Destiny Vickers entered the stage from the audience. They created their own soundtrack to their procession, producing piercing birdcalls and ominous moans before mounting the stage to face the audience and writhe simultaneously in their opening monologue.

As the play opens, we meet the cast rehearsing at a table reading, preparing for the production. The actors are in street clothes and they still carry their scripts to reference for their lines. This small detail of setting seamlessly eases the audience from the familiar to the fantastic, and almost without the viewers noticing, the actors change into full costume and all are transported to moors of Scotland.

Kristopher Dowling brings a charisma to his portrayal of Macbeth that takes the audience on a roller coaster of emotions. As the character devolves – from heroic warrior to conniving social climber and, finally, to deranged madman – Dowling humanizes Macbeth in a way that makes the text both accessible and riveting. His Macbeth puts the audience at moral odds. He is likeable and vulnerable, so the change is even more powerful when greed begets murder and karma has its payback.

As his partner in crime, Lady Macbeth fuels Macbeth’s downward spiral. Amanda Grace Williams’ queen is the devil on Macbeth’s shoulder using every weapon at her disposal – sexuality, ego and fear among them – to manipulate her husband. Williams embodies the adage, “behind every man is strong woman.” Her Lady Macbeth is the velvet-gloved iron fist prodding her husband to “screw his courage to the sticking place” and do whatever it takes, in order to make her queen.

Keeping the audience invested in that journey was fully accomplished by Director Christine Menzies and the talents of the play’s production team. They shine in their conceptualization and presentation of the play. Glen Howe’s innovative lighting design uses screens and projections that make the audience feel like they, too, have blood on their hands after each murder. Daniel S. Tator’s sound design keeps the audience fully immersed in the eerie tone of Macbeth’s moors through vocalized murmurs, shrieks and chants.

Other standouts were the comic relief of Johnny Sauceda as King Duncan, the anguished portrayal of Macduff by Avery Rodriguez, as well as the mesmerizing vocals by Jordan Murphy and Angelica Finau. Jan Bryant and Dan Speaker’s fight choreography especially kept the audience on the edge of their seats.