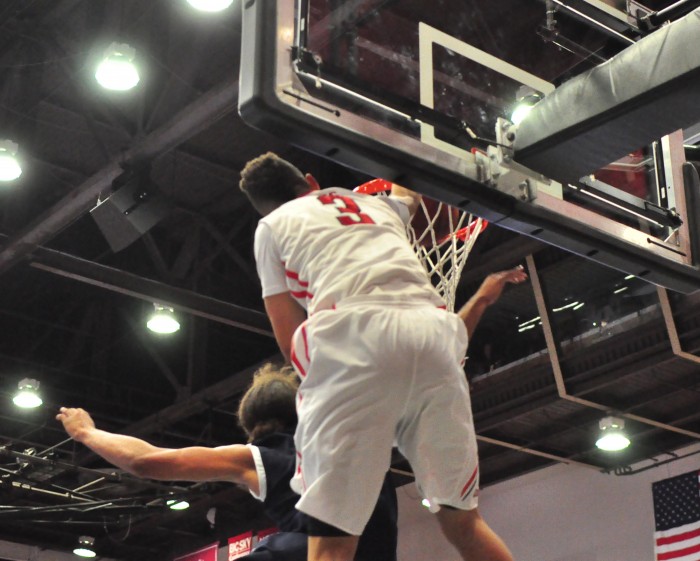 On Saturday the Matadors will travel to the Bren Events Center to face off against the first-place UC Irvine Anteaters.

The last time these two teams met, the Matadors were trounced 80-49 at the Matadome. Like in most of their games this season, CSUN was plagued by the lack of depth as they were forced to play six players 20 or minutes, including three players that saw over 30 minutes of action.

Conversely, the Anteaters were able to make substitutions with regularity, as 13 of their players saw the floor, with none of those players playing more than 25 minutes. As a result, UC Irvine was able to bring pressure in waves, and force the Matadors into problematic situations on offense, which lead to a 16-54 shooting night.

Other than fatigue and depth, the biggest thing to that impacted the previous match up, and will impact Saturday’s clash, will be CSUN’s ability to keep tabs on the Anteaters’ dangerous shooters.

In the first matchup between these teams, the Matadors could not corral UC Irvine senior guard Travis Souza, who shot 5-8 from the 3-point line, contributing to the team’s 8-19 shooting night from deep.

But leading into Saturday’s match up, CSUN looks up to the task, as they have tightened up their 3-point defense recently, only allowing their last three opponents to shoot a combined 22-62 from the 3-point line.

However, UC Irvine has been red-hot from the 3-point line as of late, shooting 18-32 from deep in the last two games.

Another crucial narrative to keep an eye on will be on the boards, where the Matadors where clobbered, despite the Anteaters missing their colossal 7’6” 300-pound sophomore center Mamadou Ndiaye. Even with the absence of Ndiaye, CSUN was outrebounded 44-29.

Although the Matadors would greatly benefit from the presence of 6’8” freshman forward Tavrion Dawson and 6’10” junior center Kevin Johnson, both have been held out since the school announced that it would be sitting select players due to an investigation regarding a possible violation of team rules and university policies. In the absence of Johnson and Dawson, two athletic big men with the potential to dominate the boards, the Matadors still have senior forward Stephen Maxwell, who has had 12 double-figure. rebounding games this season, including a 17 against Hawaii three weeks ago.

In addition to an improvement in rebounding, the Matadors will look for more creativity and fluidity on offense, after such a stagnant showing the first time these two teams played. More likely than not, CSUN will look to sophomore guard Aaron Parks to provide variety and scoring to the offense.

With Landon Drew dealing with a nagging foot injury, Parks has become a more assertive scorer, having scored in double figures in the last five games after reaching that mark only six times in the 23 games that preceded this stretch run. Parks and the Matadors should be even more optimistic considering that he muscled his way to 18 points and 11 free throw attempts against the Anteaters in late January.

Aside from Parks’s recent hot-streak, the Matadors will seem to benefit from the Anteaters’ recent string of injuries. UC Irvine could enter this game without three of its starters, as John Ryan, Alex Young and Mamdou Ndiaye are all nursing foot injuries. Although there is a very slim chance Ndiaye might play, Young and Ryan are out for the foreseeable future, and will not play against CSUN.

As the season winds down, the Matadors are holding onto the last spot in the Big West tournament by a hair over Cal State Fullerton, so it is imperative that they show up engaged on defense and on the boards, in order to come away with a crucial road victory.