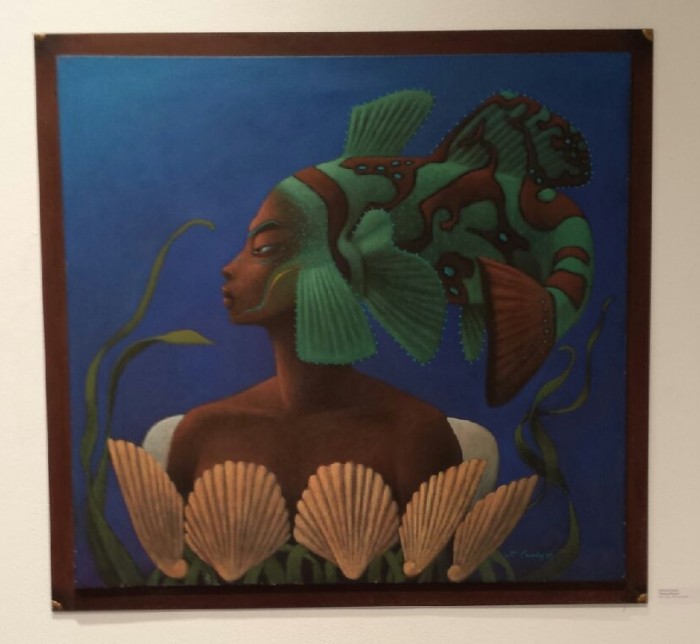 A lot of people who visited the debut of the Haitian gallery, stopped to admire Francois Cauvin's "Femme Poisson" during Jacquil Constant's "Haiti is a Nation of Artists" on Saturday, Feb. 21. Photo credit: Jordan Ball/Sundial Reporter

In the opening reception of the gallery exhibit, CSUN alumnus Jacquil Constant debuted his film “Haiti Is A Nation of Artists” and displayed various pieces of Haitian art. Constant wanted to display these pieces for the CSUN community because this is where his vision started.

Haitian art is rarely fore fronted and because of the 2010 earthquake, art has not been the general focus according to Jacquil Constant.

Constant, who has Haitian origins, stayed in Haiti for a year and a half in 2011. This was his first visit to the Island nation. Before he left, he did extensive research to learn more about the culture because he felt he had to do something since he was in graduate school during the earthquake. His extended stay in Haiti was the big break for his vision to actually become a reality.

The film “Haiti Is A Nation of Artists” is about Haitian artists portraying their culture in a manner unrecognized by other cultures, while creating transformational art after 2010. It’s also about people sharing or delving into a world they are unfamiliar with.

Every artist has different philosophies because of what they’ve gone through. Their own struggles and hardships makes their art unique. People do not see Haitian art consistently displayed in an art gallery setting which does not allow them to view the culture from their perspective according to Constant.

Ashley Flores, CSUN gallery assistant and Art History major, said,” Before I saw this, I didn’t realize there was a large cultural production of art coming out of Haiti. It’s really insightful because I don’t know much about the country, so it’s good to know they’re still producing art and it’s a good indicator of the culture moving forward.”

The exhibit lured in various people from dissimilar ethnic and cultural backgrounds who interpreted the art in different ways.

Deedee Holguin, CSUN Business Law major, said,” I feel like (Haitian art) can be a little complex to understand. It’s different, I haven’t seen art like this before. We (Americans) are close-minded and we don’t take the time to think outside of what is our everyday norm. We’re so used to simple things like social media and this opens up your mind.”

Constant says bringing people who are unaware of the culture makes the project feel more fulfilling.

Constant’s wife, Berenice, has been with him throughout this journey, witnessing this project being an idea in its infancy and has watched it turn into something real. She says, “I’m Mexican-American and what I’ve learned about the culture is that it’s such a resilient culture. In his film you will see a lot of that expertise and presence intertwined.”

The 2010 Haiti earthquake was a tragic event, but it has not defined the culture and has not halted the artistic motivation of Haiti citizens according to Constant.

This gallery exhibition is happening February 21-26. It will be held in the West Gallery inside of the Art and Design Center.