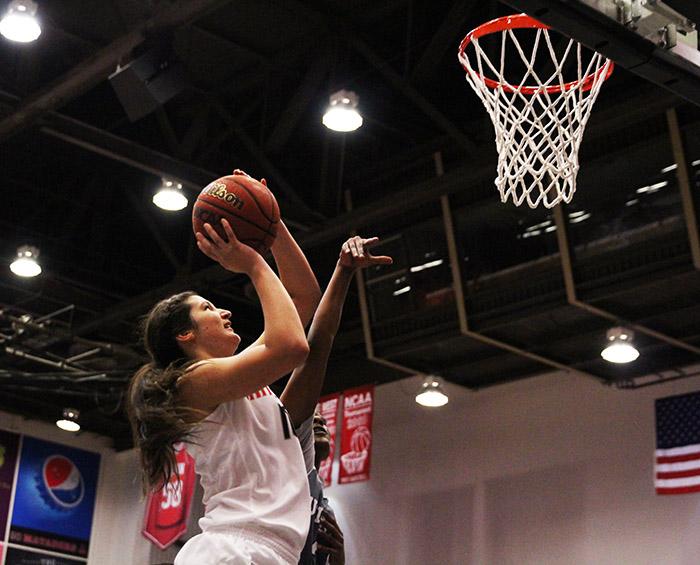 Freshman Tessa Boagni doesn't let a hand her face stop her from going up for a shot against UC Irvine during the first half of the Matadors' game on Feb. 21, 2015. (Trevor Stamp / Multimedia Editor)

It’s looking like last year’s Big West champs are continuing to pull away from their mid-season lackluster and gain their bearings as the conference tournament nears.

The Matadors racked up their fourth consecutive win against the second to last place University of California, Irvine Anteaters Saturday night 82-60.

Irvine’s mostly green team were playing with veterans — champion veterans at that. Most of the Anteaters lineup consisted of freshmen and sophomores that couldn’t hold against the time-hardened seniors CSUN brought to the table.

“Anytime you’re up by 30 in the game, you’re doing something right,” Flowers said.

CSUN has no problem doubling up on an opposing power offender and pushed the Anteaters to a couple of backcourt violations in the process. Irvine’s top shooter Mokun Fajemisin was completely scoreless for the game, despite playing 27 minutes against CSUN.

“We were just making sure that they didn’t have open looks,” CSUN senior guard Jasmine Johnson said.

But Irvine wasn’t rendered useless by the offensive lockdown and the Anteaters sniffed out some scraps with guard Tierra Hicks. The freshman landed 16 points for the game, with three from within the paint, two outside the arc, and landed four out of five free throws for her team.

“She was athletic,” Johnson said. “We had to really make sure we put extra effort into boxing her out.”

The Anteater was bested by CSUN’s guard Ashlee Guay who can put the ball in the basket when determined. The senior secured the game high with 18 points and put down two 3-pointers.

In fact, a good portion of CSUN’s team can manage the ball like a precision instrument and Irvine had trouble following suit.

“When we’re on the same page, we are unstoppable,”  Johnson said.

When under pressure, senior Randi Friess could work the ball into the arc, dodging smaller and quicker opponents.

Johnson played the five effectively, collecting rebounds and setting up nice breakaways for her team’s guards.

When CSUN plays a team like Irvine their strengths stand out as much as their weaknesses.

Northridge’s guards face some stoppage in the key against Irvine’s taller defense and had difficulty driving the ball early on.

Some of the rookies and taller defensive players flopped passes and gave away plays in sloppy turnovers, but the bench needed to play too.

CSUN, with this victory, stands tied at third in the Big West with Cal Poly.

Next, the Matadors will face the California State University, Fullerton on Feb. 26, another lower ranked Big West team who was defeated by the now 1-24, University of California, Santa Barbara.

The Titans still stand at a lowly seventh place in the conference, despite losing out to the dead-last Gauchos.

“I think our best basketball is still ahead of us,” Flowers said. “I like the direction we’re going.”