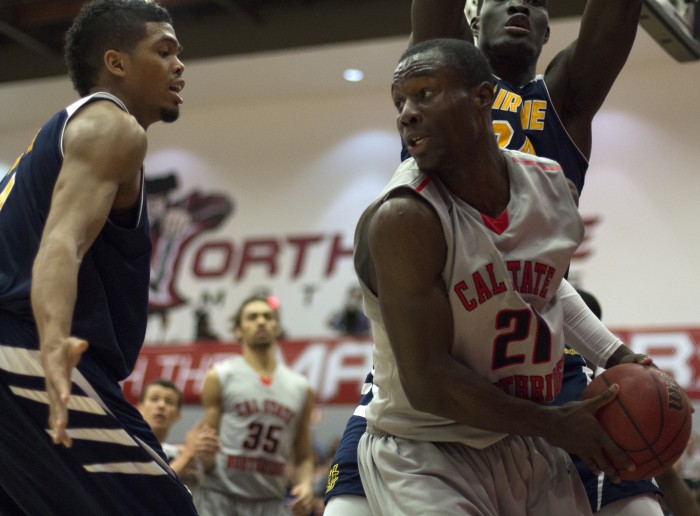 After getting blown out in the first game against the Anteaters, the Matadors came out looking to prove a point, jumping out to an 8-2 lead. The early charge was due in large part to senior forward Stephan Hicks’s ability to find cracks in the defense, as he scored the Matadors’ first four shots.

“I came out with a lot of energy,” Hicks said. “I saw a couple buckets go in, and that was it.”

But after getting hit early, the Anteaters would punch back by switching to a zone defense and going on a 14-4 run, taking a 16-12 lead on a 3-pointer from sophomore guard Luke Nelson.

“They went to zone, because they couldn’t guard us in man,” CSUN head coach Theus said. “Which is okay.”

Refusing to let this matchup mirror first one, CSUN responded with a 7-0 run of their own, capped off by a 3-pointer by junior guard Landon Drew, that quieted the crowd at the Bren Events Center.

But when it seemed like the Matadors were ready to take control of the game, the defensive issues that plagued them in their first matchup with UC Irvine reemerged. Over an eight-minute stretch, the Matadors couldn’t close out on the Anteaters’ shooters quick enough, as they allowed UC Irvine to shoot 5-7 from beyond the arc for the remainder of the half.

Even though CSUN played the Anteaters evenly for the majority of the first half, two 3-pointers in the final two minutes put the Matadors in a 41-34 hole at halftime.

After running precise offense and leading for over eight minutes in the first half, the Matadors, who played seven players (all of whom played at least 23 minutes), looked tired and disinterested to start second half. Their first two offensive possessions featured two missed shots, a lot of standing around and very little communication.

Theus blamed the lack of a guiding force or voice as the reason for the inauspicious start to the half.

“It was just a lack of leadership and a lack of toughness, in the start of the second half,” Theus said, as he shook his head.

In addition to their lackadaisical showing on offense, the Matadors looked equally as fatigued and disengaged on defense. Less than six minutes into the second half, the Matadors surrendered five offensive rebounds, after only allowing that amount in the entire first half.

“There’s a certain amount of toughness that when you get tired, you have to it,” Theus said. “And when the game is on the line you have to have it.”

As a result, the Anteaters were able stretch the lead to as much as 18, due in large part to the 16 second-chance points the Matadors yielded in the game, and essentially put the game out of reach.

Although CSUN clamped down and held UC Irvine to 1-10 shooting from the 3-point line in the second half, the game was decided on the boards, where nine of the Anteaters’ 23 second half rebounds were offensive rebounds.

Despite the Matadors’ apparent lack in desire and toughness, they just didn’t have the legs or the energy to get up and take the ball.

“When you get tired, the game changes,” Theus said.

After losing another crucial road game, CSUN will return to the Matadome to play the Cal State Fullerton Titans at 7 p.m. Thursday, for what will most likely be a de facto elimination game in the Big West.