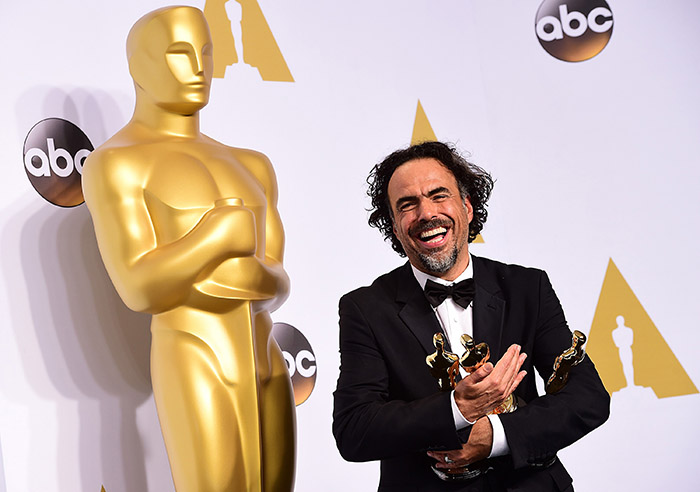 Alejandro G. Inarritu accepts the award for best director for "Birdman or (The Unexpected Virtue of Ignorance)'', in the press room of the 87th Academy Awards on Sunday, Feb. 22, 2015, at the Dolby Theatre in Hollywood. (Ian West/PA Wire/TNS)

“Birdman”, a film that challenges its audience with reality and illusion, took home Best Picture of the year, along with three other awards, at this year’s Annual 87th Academy Awards on Sunday.

The night began as the shows host, Neil Patrick Harris, honored the movie nominees and industry with a movie inspired musical number. Harris was also was joined on the stage by Anna Kendrick, who was dressed as her character from the film “Into the Woods”, and Jack Black, who enthusiastically ranted on about superhero and the future of the Academy.

Lupita Nyong’o, last years winner of Best Supporting Actress, kicked off the night in a beautiful pearl-embellished Calvin Klein gown as she announced that J.K. Simmons was the winner for Best Supporting Actor for his role as a fiery abusive band teacher in the film “Whiplash”.

It was a night that really spread the wealth in Hollywood. The films “Birdman” and The “Grand Budapest Hotel” tied with four Academy Awards each. “Whiplash” won three. “Boyhood”, the film that had been established as the favorite early on, only came away with one award for the night.

Julianne Moore took home Best Actress, honoring her for her performance as a middle-aged woman who finds herself struggling with the Alzheimer’s disease in the film, “Still Alice”. Eddie Redmayne was honored with the award for Best Actor for his beautiful portrayal of Stephen Hawking in “The Theory of Everything”.

Patricia Arquette won for Best Supporting Actress for her performance in the film “Boyhood”. Arquette was met with a standing ovation from the audience after she gave her acceptance speech, which discussed equal rights for women. A speech that practically left Meryl Streep and Jennifer Lopez falling out of their seats in excitement.

In a special tribute to the 50th anniversary of “The Sound of Music”, Lady GaGa shocked the audience as she performed songs from the movie and then was joined onstage by a surprise appearance from Julie Andrews.

There were a variety of musical performances from artists, including Adam Levine, Tim McGraw, Tegan and Sara, The Lonely Island and Common. Previous Oscar winner, Jennifer Hudson , performed the song “I Can’t Let Go“ during the portion of the night that honored those in the industry who had passed away this year.

The award for Best Song ultimately went to John Stephens and Common for their song “Glory” from the film “Selma”, which the duo had performed earlier in the night, bringing the audience to tears with its historical and inspirational content.

The night was filled with, tears, laughs, inspirational speeches, Lego statues, and even magic tricks. The show was not without it’s humorous moments, one in which included Harris appearing on stage in his underwear, poking fun of Michael Keaton’s performance in “Birdman”.

Harris concluded the night with a magic trick involving a locked briefcase that contained his humorous show predictions for the night, such as, Terrence Howard will become surprisingly emotional and John Travolta will engage in awkward face touching.

The Best Picture of the year was presented to the film, “Birdman”. Which left its cast and crew ecstatic.