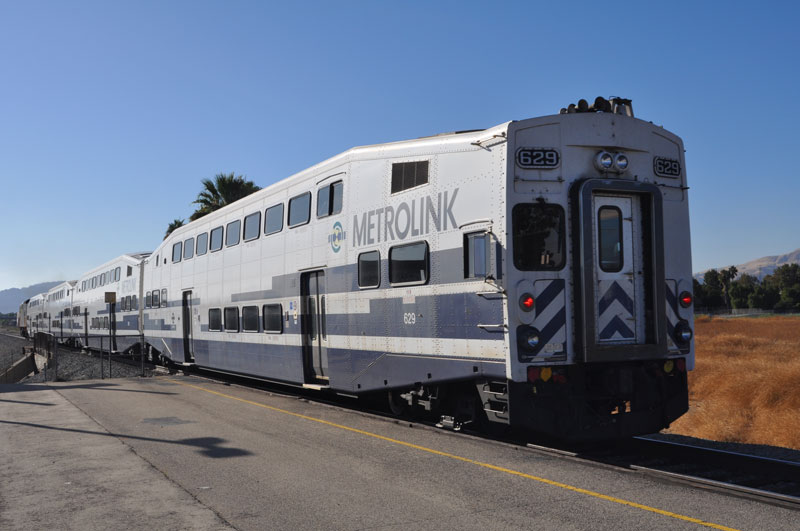 LOS ANGELES (CNS) – A Los Angeles-bound Metrolink train struck a truck
on the tracks in Oxnard today and derailed, interrupting rail service from
Ventura County and sending 28 people to hospitals, including four in critical
condition, authorities said.
The crash occurred shortly before 6 a.m. just east of the Oxnard
Station, near Rice Avenue and Fifth Street. Ventura County Line train 102 was
en route to Union Station in downtown Los Angeles when the crash occurred, said
Metrolink spokesman Jeff Lustgarten.
The four passenger cars and the locomotive — which was at the rear,
pushing the train — derailed, according to the Oxnard Fire Department. The
three forward passenger cars tipped over on their side, said Metrolink
spokesman Scott Johnson.
The truck driver, who was not injured, got out of the vehicle and ran
off, but was taken into custody by law enforcement officers, the fire
department reported.
The single track is owned and operated by the Union Pacific Railroad,
and shared by other rail operators, Johnson said. It could take all day to
clear the scene, officials said.
Fifty-one people were assessed at the scene for possible injuries, and
28 of them were transported for hospital treatment, four of them in critical
condition, the fire department reported. No fatalities were reported.
According to the fire department, trains can reach 79 mph along that
stretch of track, but the engineer saw the truck and began slowing the train
before impact.
The train consisted of four passenger cars and a locomotive at the rear,
Johnson said. The engineer was in the first passenger car — known as the
“cab car” — and was operating the train from there. The engineer and the
conductor were among the injured, Johnson said.
The cab car, along with the third and fourth passenger cars, were newer
cars, equipped with “collision energy management technology,” which is
designed to “send the impact outward instead of inward and prevent
crumpling,” Johnson said. The second passenger car was an older car,
retrofitted to accommodate bicycles.
Johnson said the Metrolink/Amtrak “shared train” 761 from Union
Station to Oxnard has been canceled for today. Rail passengers were urged to
use alternate transportation.
Buses were sent to the scene to accommodate stranded rail passengers.
In 2008, a Metrolink train head towards Moorpark from Union Station
colided with a freight train and derailed in Chatsworth, killing 25 and injuring
over 100 people.
Metrolink passengers can call (800) 371-LINK for more information, or visit the
Metrolink Facebook or Twitter pages.