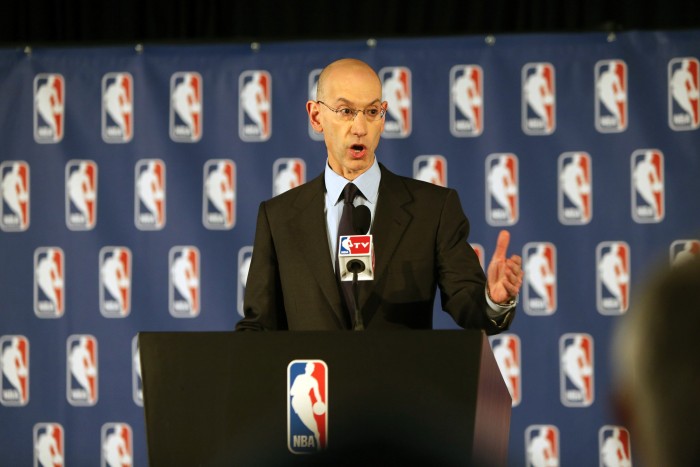 As the trade deadline passed, Jordan and Julius are back to dissect the teams that were active on Thursday, Feb. 19.

With the trade deadline over but still a hot debate, J&J are back to analyze the winners and losers of the trade.

Goran Dragic might be the biggest winner of the trade deadline because he finally got what he wanted (being traded out of Phoenix). The Suns sent Dragic to the Miami Heat who were in desperate need of some assistance which makes him a perfect fit. He’s now on an assured playoff team and will get to showcase his talents on the playoff stage in May. If Dragic can keep performing at this level, against an abysmal Eastern Conference, then his price tag will definitely increase. His services could be available this offseason because he did not sign an extension with the Heat, which means Dragic has control over his future.

The deadline was a sad day to be a fan of the Los Angeles teams. The Lakers did not close the deal on their pursuit of Dragic and they managed not to trade certain players on their dismal roster. The Lakers did not succeed at the deadline, but they fortunately have a bright summer ahead. The Clippers, on the other hand, had no excuse to not make a deadline splash. Doc Rivers (the coach) is one of the best in the NBA, but Doc Rivers (the general manager) has not done a good enough job of improving the Clippers roster. The most glaring need for the Clippers is a consistent scorer who can take some pressure off of Chris Paul, and they continue to fail in acquiring one. This was the trade deadline to make this type of acquisition. The missing presence of a scorer for the Clippers will once again haunt them in the playoffs.

The Bucks are sitting comfortably at sixth in the Eastern Conference standings. Though they lose Brandon Knight at the deadline, they gained two young promising players in Michael Carter-Williams and Miles Plumlee. They also waived center Larry Sanders who had constant off the court issues and was not performing close to the level his contract mirrored. Head Coach Jason Kidd has the Bucks ranked sixth in total defense this year. The additions of 6’6 point guard Michael Carter-Williams and 6’11 athletic big man Miles Plumlee, coupled with the bevy of length that the Bucks already have, these trades might make them the most exciting young team to watch in the NBA.

The Phoenix Suns acquired Brandon Knight and a first round pick despite losing Dragic and Isaiah Thomas. This is not why they are losers of the deadline. The acquisitions of Danny Granger and Marcus Thornton are more than enough of a loss. The Suns officially conceded their contention for the eight seed when they acquired those two players. The Suns have set themselves up for next year, but the Oklahoma City Thunder and New Orleans Pelicans are the easy favorites for the eighth seed this year.

Arron Afflalo was slowly wasting away in Denver and his talents were not being displayed how we’re accustomed to seeing. His departure was the best situation for both. He’s sent to a Portland Trail Blazers team who is a Western Conference playoff contender. His presence could be the missing link the Blazers need in the playoffs. Afflalo will be able to guard multiple positions, score in a consistently efficient manner and his playoff experience is something the Blazers have lacked. Reggie Jackson is a different story, being traded away from Oklahoma City at the deadline. He wanted to be a starter and he knew the chances of it happening in OKC were slim. They sent him to a Detroit Pistons team who were in dire need of a starting point guard since Brandon Jennings season ending injury. The Pistons are .5 games out of the eight seed and Jackson will be their starter. Reggie Jackson got exactly what he wanted, so it’s time to perform.

Yes the Charlotte Hornets were able to acquire Mo Williams from the Timberwolves but they are an obvious loser of the deadline because of their Lance Stephenson dilemma. Since signing Lance Stephenson to a multi-year contract this summer, the signing has not panned out. Statistically, he is not in the neighborhood of his production last year. The past couple of months there were buzzing rumors surrounding the Hornets, who were reportedly trying to trade him. His presence has the Hornets stuck in the same position, which is a team sitting 11th in the east behind Stephenson’s old team (Indiana Pacers).

The commotion caused by the abundance of trades generated at the deadline sparked debate around the NBA universe. The buzz on social media by players, analysts and fans was the spark the NBA season needed. These transactions did not create super teams or see superstar players traded, but it saw certain teams improve, young players traded to new destinations and one major star (Goran Dragic) moved. This could be the most entertaining second half stretch in recent memory. Players, organizations and fans were able to feel satisfied after the deadline, but the real winner was the NBA.

Before the deadline, the Thunder were on the outside looking in when it came to playoff positioning. But after dealing multiple draft picks, Kendrick Perkins and Reggie Jackson, they seem poised to not only make the playoffs, but also make some noise once they got there. Even prior to making trades, the Thunder were on a bit of a hot streak, winning five of their last six, including double-digit wins against the Clippers, Mavericks and Grizzlies.

It’s scary to think that the Thunder were returning to form despite the fact that they were forced to start walking “Shaqtin a Fool” candidate Kendrick Perkins. Now they have turned Perkins and disgruntled guard Reggie Jackson into D.J. Augustin, Steve Novak, Kyle Singler and Enes Kanter. Thunder General Manager Sam Presti did a masterful job of leveraging the Nets’ interest in Reggie Jackson into a more lucrative deal with that netted his team a more traditional point guard that can compliment stars Russell Westbrook and Kevin Durant, another 3-point specialist, and a versatile forward that will allot head coach Scott Brooks more flexibility on offense. Even though those are nice acquisitions, the real landscape-changing pick-up for Oklahoma City was Enes Kanter. It’s no secret that Kanter doesn’t possess the offensive repertoire that Pau Gasol or DeMarcus Cousins do, but Kanter is a more than capable low post threat, something that the Thunder haven’t had since Durant’s arrival. Despite having to share minutes and space with Derrick Favors and Rudy Gobert, Kanter was able to average 13.8 points per game and 7.8 rebounds per game. Maybe even more encouraging, Kanter is still only 22 and honing his game, and with Oklahoma City’s track record of developing young talent, Kanter could stand to improve in the near future.

The addition of Kanter, Augustin, Singler and Novak, also means that the Thunder are now one of the deepest teams in the league. With rookie center Mitch McGary proving that he can bring instant energy and production, the Thunder now go three-deep at the center position, something that will prove to be valuable if they run into the Grizzlies in the playoffs. Furthermore, Singler and Novak provide some much-needed spacing from the forward position, which Westbrook will surely take advantage of.

When I look at what the Suns did, I see that they gave up Dragic, Isaiah Thomas, Miles Plumlee, a draft pick that could end up being the sixth pick of this year’s draft, and for what? Brandon Knight, who might not resign this summer? Draft picks Pat Riley wasn’t even going to use? At the end of the day, Phoenix gave a lot to get a little.

Aside from the Thunder, the Heat was the other team that made a move that could potentially shake things up in the playoffs. They commited highway robbery when they flipped Danny Granger, Norris Cole, Justin Hamilton and two first round picks into Zoran and Goran Dragic. With the addition of Goran Dragic, the Heat may have become one of the most dangerous pick and roll teams in the league. However, we will not see that come to fruition this season, as forward Chris Bosh will miss the rest of the season with a blood clot on one of his lungs.

With that being said, it’s not out of the realm to see a team that still features, Dwyane Wade, Hassan Whiteside, Luol Deng, and Goran Dragic to surprise some teams in the playoffs (I’m looking at you, Cleveland). There’s just too much offensive firepower there (assuming Dwyane Wade gets healthy) to discount the Heat.

There’s no denying that Isaiah Thomas is a gifted scorer and substantial talent, but his arrival in Boston is cause for skepticism. After the Celtics dealt Rajon Rondo, it looked like they were ready to move forward with Marcus Smart as the lead guard, but Thomas’s presence makes things uncertain in the backcourt. On top of that, the Celtics also surrendered a first round pick to the Suns, something that should be a valuable asset for a team that is in the midst of a rebuilding process. Unless the Celtics are planning to deal Thomas or guard Avery Bradley, this move might delay their return to relevancy.

Yes, I know it looks bad in Philadelphia right now. But with the Sixers stockpiling so many draft picks, it’s hard to believe they won’t hit on any. In addition to six picks they already had in this year’s draft, they added another two, including what might be a top-10 pick belonging to the Lakers. That’s potentially eight chances at finding building blocks to add to the young core already in place. It would take a truly incompetent front office to whiff on that many picks, and I don’t think Sam Hinkie and the Sixers’ brass are inadequate.

Any team that acquires Ramon Sessions is automatically a loser. The Wizards needed a backup point guard that could lead an offense (like an Isaiah Thomas) but they ended up with one of with one of the worst finishers at the rim in the league. Inside of five feet, Sessions shoots appalling 39.7 percent. However, Session doubles down on his putrid shooting, as he only shoots 24.1 percent from the 3-point line. Although Andre Miller is 38 years old, he’s still a better option than Sessions. Anybody is a more viable option than Sessions. When in doubt, don’t get Ramon Sessions.

In what may have been the two quietest moves on deadline day, the Rockets added much-needed depth and leadership to their roster. With the acquisition of Pablo Prigioni, the Rockets got a backup point guard who can shoot and provide stability and leadership in their second group. And for reasons unknown, the Sixers handed over K.J. McDaniels, an athletic rookie, who has unlimited potential on defense and is a nice safety net, if Josh Smith and/or Corey Brewer don’t work out past this season.

J&J will be back to analyze the top five starting five. If you have any requests or want to contact J&J, tweet at them @lasinjulius and @Golden_Jordan1!