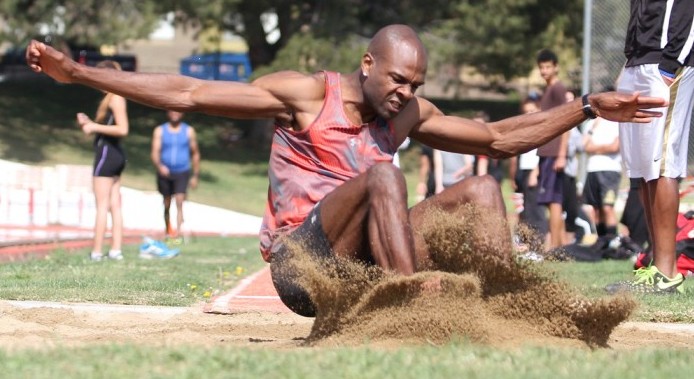 Father-son teams, CSUN alumni, parents and their children, and even a future American Ninja Warrior graced the All Comers meet as the occasional CSUN-sponsored track meet carried on under gloomy skies.

What started as a chilly overcast morning turned into a warm and sunny afternoon both for the weather and the competitors Saturday Feb. 21 – as compared to the rain that fell on the Feb. 7 meet.

Father and son team B. Khatra, 40, and his 13-year-old son Ancop both competed in the javelin event. The father speared the competition with a best throw at 49.34 meters.

Meanwhile, Ancop who followed in his fathers’ footsteps (pun intended) with a 33.04 meter throw paced the rest of the field who were in the 32-38 meter range.

The All Comers meet is a win-win from all angles: raising funds for the CSUN track and field team and provides a professional venue for pretty much anyone that would like to participate.

“I’m a bit rusty, as I’m coming back from an injury, but it’s fun and I’m glad to be back jumping,” said Tiana Webberley. She is now volunteer coaching while prepping for an upcoming appearance on NBC’s American Ninja Warrior. Webberley was also called “one of the greatest pole vaulters in CSUN history,” according to GoMatadors.com.

Long jumper Narc Narcisses dominated the field for the second time in two meets beating his Feb. 7 best of 22’ with an amazing 24’ 1” jump.

The cost of $5 covers admission and as many events as one would like to enter. In fact the parking costs more that the meet at $6 making this an economical way to compete, practice or just stay in shape.

CSUN alumnus Tom Johnson, 25, came down from Lancaster to “have some fun” high jumping. His best jump to date is 6’ 11 ½” although after clearing 6’ 6” he decided to pack it in as “I just don’t feel it today.”

All Comers offers a number of events to compete in such as various running events along with pole vault, long and high jump, javelin, shot put and discus throws, and both weight and hammer throws.

The event also brought Rhonda Tin, a 1997 biology/food services alumna, attending to watch her son compete in the 200 meter dash.

“They’re starting a bit late he shouldn’t have eaten when he did – every minute [of digestion] counts,” Tin said.

This was the last “open” meet of the year with the final All Comers “Kids Day” wrapping up the year on March 7.

However, the CSUN track and field team has their first home meet here at the Matador Track Complex with the CSUN Invitational on Saturday, March 14, followed by the Northridge Invitational on March 19 -21. For more information visit GoMatadors.com