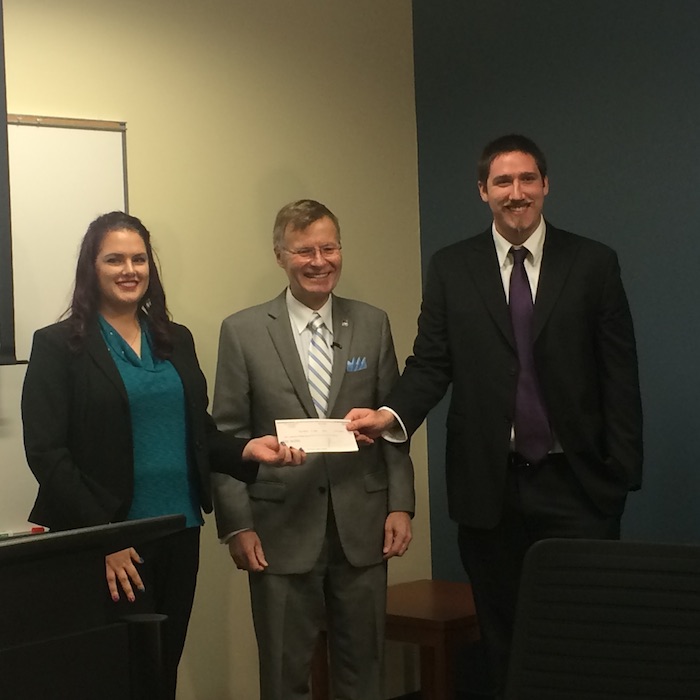 Lily Thiemens (left) and James McCloskey (right) collect their National first place winnings from a contest requiring students to submit ideas on how to attract people to pursue a career in the manufacturing industry Photo credit: Nancy Oy

Two CSUN students were presented with a check after winning first place in a national contest on Tuesday in Jacarada Hall.

Steve Blue, president and CEO of Miller Ingenuity – from the company that conducted the contest, presented the check to the students while their parents and faculty members, including Dean of College of Engineering and Computer Science, Dr. S.K. Ramesh, applauded.

The contest required students to submit ideas on how to attract people to pursue a career in the manufacturing industry, according to a press release from CSUN.

Blue said the collaboration between Thiemens and McCloskey was key to the students win. If the students had not worked together, they would not have won, Blue said.

Thiemens and McCloskey worked on their project in a span of three weeks, Thiemens said.

“When James first messaged me and asked if I wanted to work on this project, I asked him if he was a crazy person because I had ten other paper to write. I’m like ‘oh good another paper great I have time for that,” Thiemens said.

This isn’t the first time they’ve worked together. Thiemens and McCloskey have been dating for three years and have collaborated on previous projects, Thiemens said.

“We’re very goal and project-oriented so we do a lot of contest together because we both like talking challenges,” Thiemens said.

Other projects they’ve done together include crafting, design and 3D printing, McCloskey said.

At first, McCloskey said he researched to make sure the contest was real.

His mother, Kathy McCloskey said they’d brainstorm in the car and discuss, “was [the contest] worth it? Was [the company] a real place?”

The couple balanced working on the paper while attending school, Thiemens said. She would work on writing the paper while McCloskey worked on the video. Both would share the research.

They were surprised when they found out they won, Thiemens said.

“We got the email late at night, so random. I was checking for class work and I’m like ‘is this spam? This isn’t spam. Oh, my gosh! We won’,” Thiemens said.

Both students are graduating in May 2015 from their respective masters programs. Thiemens said she is planning on going to graduate school. McCloskey said he is thinking about teaching at CSUN or continuing his education.