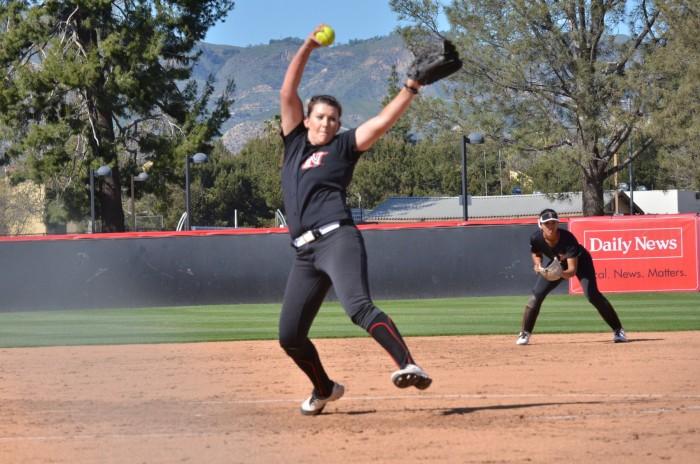 Senior pitcher Brianna Elder kept it at a tie game after striking out three of her opponents. Photo credit: Nate Perez

The Matador’s (13-3) pulled out some late inning heroics to defeat the St. John University Red Storm (4-6), 3-2 in their first home game of the season today.

“We were trying to do so many things to just make adjustments on the pitcher,” said Horvath. “At that point coach just told me to hit the ball hard and score a run, and I thought ‘anything in my wheel house, I’m swinging.’”

Offense came at a premium for both teams. CSUN’s senior pitcher Brianna Elder and St. John’s junior pitcher Tori Free combined for two hits allowed through six innings. A fourth inning double by St. John’s senior catcher Erin Burner was the first hit of the game for either team.

The Matador’s jumped on the board early thanks to a second inning error by Anderson, plating two Matadors in the process.

Both teams fell into a scoring drought between the top of the third and the bottom of the fifth.

The Red Storm got back into it in the sixth inning. St. John’s head coach Amy Kvilhaug decided to play the percentages and pulled Burner, who managed a two out walk in the previous at-bat, for freshman infielder Taylor Stinson. The next batter, freshman first baseman Krystal Puga, knocked a 2-0 pitch over the right field fence to tie the game at two.

Undeterred, Elder bounced back, striking out the next St. John batter on three pitches, keeping the score tied.

Freshman pitcher Zoe Conley, who was named the Big West Pitcher of the Week on Monday was called on in the top of the seventh to keep the score tied and give her team a chance to pick up the win in the bottom of the frame.

“I actually didn’t know I was coming in,” said Conley. “[Coach] was just like be ready and get warm. It wasn’t too bad; I had been coming in recently in relief.”

Conley would later be awarded the win for her efforts. It was the freshman’s eleventh appearance on the hill of the season and her fifth win. Elder and Conley combined to send 11 Red Storm batters back to the dug out on strikes (nine for Elder and two for Conley) and only one walk.

“[Elder] threw a lot of pitches in the beginning and Zoe did a good job of coming right at the hitter, so they definitely compliment each other,” said CSUN head coach Tairia Flowers.

The two pitchers have posted some of the best pitching numbers in the Big West this season. Conley and Elder both rank among the leaders in a number of different pitching categories.

The freshman class proved vital in today’s contest. Both Horvath and Conley, two of the Matador’s key recruits this year, came up big in key spots.

“They’re getting the hang of it,” said Flowers. “We tell them all, ‘as soon as you step onto this campus, your not a freshman anymore. You gotta step up when we need you to’ – and they both did a good job of that today.”

The Matadors will bring their five game winning streak to Matador Diamond on Wednesday for a double header against Utah Valley University (5-5). The Matador’s continue to build one of the program’s best start in recent memory.

“I can’t explain it,” said Horvath. “I don’t think any other home opener could compare to this.”