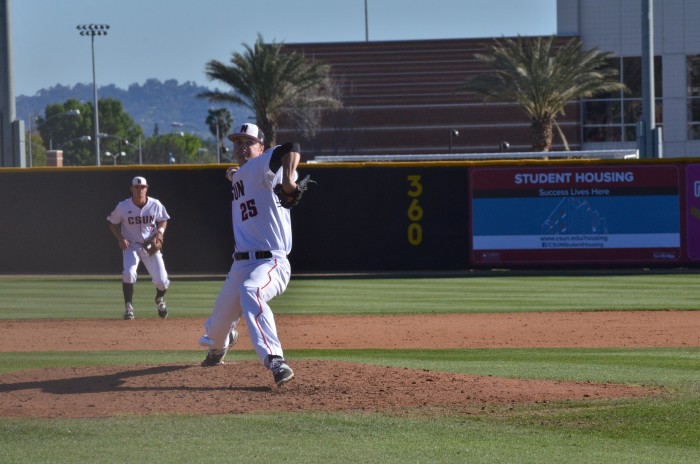 “Connor has been our closer,” said CSUN’s men’s baseball head coach, Greg Moore. “We called him last night and we asked if he wanted the ball, and he said ‘give it to me,’ without a doubt.'”

O’Neil struck out six batters in his first CSUN win, after succumbing to the Matadors only loss to UCLA a week ago.

Senior outfielder, Chester Pak, put the Matadors on the board in the first inning before freshman outfielder, Justin Toerner, blasted a home run to give CSUN a 3-0 going into the third inning.

“We came out and took some good at bats early,” said Moore. “Pak got us started with a bloop single that was just a good piece of hitting, and it carried on.”

It was scoreless in the fifth and sixth innings, before CSUN stormed the seventh inning with six runs. Pak, along with senior utility player, Nick Blaser, and junior infielder, Nolan Flashman, bolstered the Matadors lead with an RBI each.

“It was a full-on team effort,” said Pak. “Guys just setting up good at bats for one another.”

GCU were able to score a run, but CSUN pulled through with the 10-1 win that help extended their winning streak.

“That’s a good team we played today,” Moore said. “They play aggressive, they play fast, I think getting ahead allowed us to slow the game down a little bit. We have a lot of work to do, so we’re not close to where we need to be.”