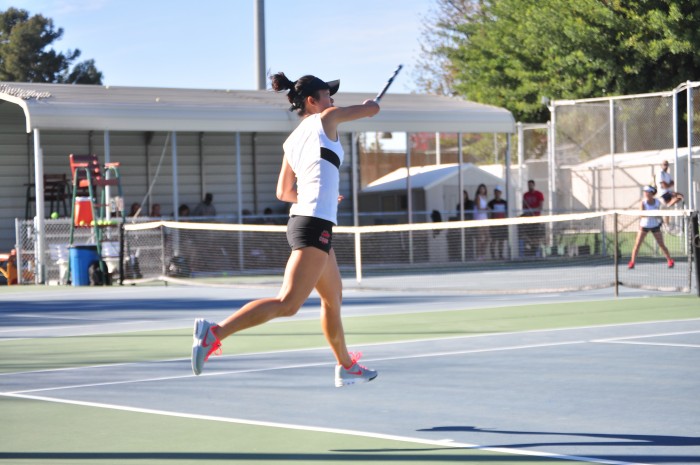 The Matadors (5-0, 3-0 Big West) defeated Eastern Michigan 6-1 in a non-conference match Tuesday afternoon at the Matador Tennis Complex. Using a new scoring format from the Intercollegiate Tennis Association, CSUN lost the doubles matches but rallied to sweep the singles matches to remain undefeated.

The new format attempts to speed up the game by requiring the first team to win six doubles matches in a set versus eight, as well as eliminating deuces and advantages. At 40-40, the game is won on the seventh point. The Big West has not adopted the new format for conference play, and neither opponents can decide if they want to use it.

Sophomore Mickey Hsu and sophomore Kristen Poei won 6-3 in their doubles match. Their victory was the only one out of three doubles matches.

Freshman Kiryank Kim won a hard fought battle in a tiebreaker in the first set, eventually defeating her opponent 7-6 (2) and 6-4.

Senior Criss Rodriguez and junior Jessica Warren won in straight sets in the fifth draw. Poei defeated her opponent in two sets in the sixth draw to complete the six-match win streak.

The Matadors look to continue their five-game winning streak and remain undefeated in the Big West Conference when they travel to Cal Poly Saturday, Feb. 28. First serve is scheduled at 11 a.m.