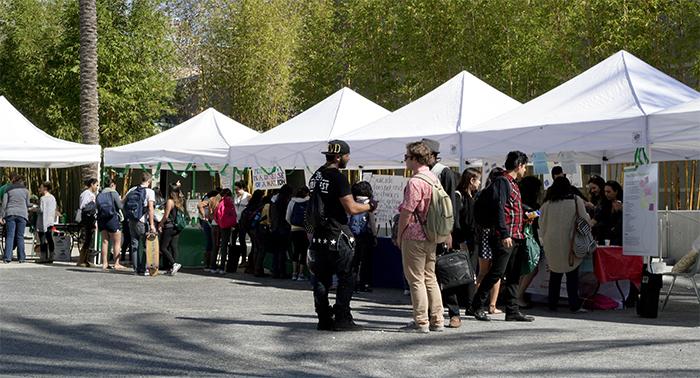 A tabling fair took place in the Plaza del Sol for National Eating Disorder Awareness Week, which also marked the end of the festivities, on Wednesday Feb. 25. The fair was hosted by students from Journalism 371 (Women, Men and Media), in collaborations with NEDA.

NEDA stands for National Eating Disorders Association which is a community engagement project to develop campus outreach and most recently through their website proud2bme.org. A site created by and for teens geared towards prompting positive body image along with encouraging healthy attitude about food and body image.

The event featured plenty of activities that reinforce the overall message about positive image with music playing in the background. Students who attended received giveaways for participation by various booths from different groups on campus such as the blues project, veterans resource center, Delta Delta Delta, Joint Advocates on Disordered Eating (JADE) and many others.

“We are trying to emphasize our message to people on social media,” Project Manager of the proud2bme booth Lauren Llanos said. “Our goal is to spread our message nation wide.”

CSUN is one of two campuses that are partnered with NEDA in order to advocate for the cause towards a more positive self image, the other campus being NYU New York University. The two campuses are trying to recruit other campuses to spread the message to the youth and by doing so, promoting self-awareness and positive ideas about self-image.

Ruth Rosa, a senior majoring in psychology, was part of the JADE booth helping participating students make mason jars with uplifting messages inside for whenever bad days occurred.

“We want to promote the positive messages for everyone no matter who it is,” Rosa said.

People who participated in certain events were encouraged to upload their images and self messages into various social media’s such as BuzzFeed and Instagram, using the hashtag PROUD2Bme, and to follow the proud2bme page on Instagram at Proud2BmeUS.

“We have to be confident about our self image,” biology major Courtney Lao commented. While also adding, “Inner beauty is better than outer beauty.”