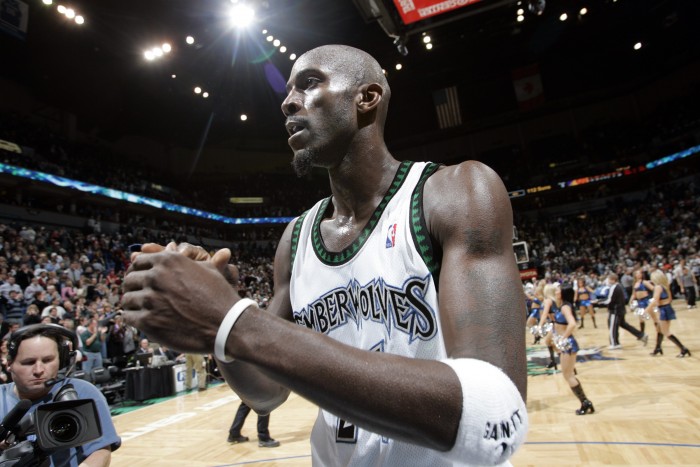 Minnesota Timberwolves' Kevin Garnett returns to the team that drafted him in 1995. Photo courtesy of TNS.

“Da Kid” had hair then. His aggressive defensive energy matched perfectly with his hip hop flavor accompanied by his need to refer to everyone as his ‘dogg’. The Minnesota Timberwolves finally gained a personality – the face of their franchise.

By the ‘90’s, almost 20 years passed since the NBA drafted a high school player, a taboo for some. High school athletes weren’t strong enough, weren’t mature enough and definitely didn’t contain the basketball IQ to go toe-to-toe with the likes of Magic Johnson or make it through the pits of the Seattle Supersonics defense. Can’t expect that from an 18-year-old.

Darryl “Chocolate Thunder” Dawkins was the only mildly successful high school draftee thus far. But besides shattering backboards and a sub-par career, Dawkins’ popularity was pinned by Motown legend Stevie Wonder giving him his nickname.

Despite the odds and an already struggling franchise, the Minnesota Timberwolves’ front office picked Kevin Garnett out of Farragut Career Academy High School in the 1995 NBA draft.

A scrawny 6-foot-11-inch forward from Westside, Chicago was expected to put a city on his back. A city full of hopefuls. A city that was granted an expansion team with no superstar to headline the morning newspapers.

Averaging 17 points and eight rebounds as a starter, the Timberwolves made their first playoff appearance in franchise history after being established in 1989.

Garnett led the Timberwolves to eight consecutive playoff appearances and in the 2004 campaign a trip to the western conference finals. Though the Los Angeles Lakers won that series 4- 2, it was their biggest accomplishment to date.

Everything was finally clicking. Garnett’s resume continued to stack with a host of awards ranging from Most Valuable Player to NBA All – Star Game MVP. His name appears on numerous All- NBA team lists and he leads the Timberwolves in the five major statistical categories – steals, rebounds, points, assists and blocks.

After many failed attempts for a ring, the loyal kid-turned-franchise saver was set loose in 2007 to pursue a championship before his playing days were up. He would find that with the Boston Celtics in 2008.

Seven years later, after a six year hiatus in Boston and a two year stint in Brooklyn, Kevin Garnett returns to the place that took a chance on him 20 years ago.

To a team whose progress was sacrificed in order to satisfy their alpha-wolf’s desire to win the big one. To a team that gave up a rising talent in Thadeous Young for the return of a man who now barely averages seven points per game.

The Minnesota Timberwolves aren’t just welcoming back a player. They are rolling out the red carpet for “Da Kid”. Though not scrawny, very much bald headed, and wearing matching knee pads Kevin Garnett is right back where he started.