Men’s Basketball: Season on the line against the Titans 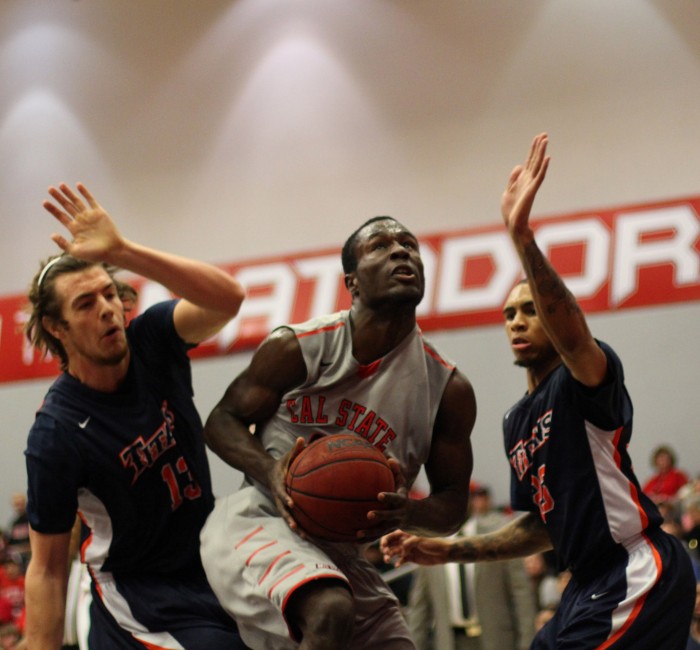 With three games left in the regular season, the struggling Matadors (7-22, 2-11 Big West) are looking to exponentially increase the likelihood that they qualify for the Big West tournament with a win over the Cal State Fullerton Titans (9-18, 1-11 Big West); however, a loss will cripple CSUN’s chances of making it to the tournament.

“If they don’t come out, there’s a strong possibility we won’t make the tournament,” Matadors’ head coach Reggie Theus said.

The good news is that CSUN is going up against a Titans team that has one victory since Jan. 8, but the bad news is that lone win was against the Matadors, 69-53.

In their matchup three weeks ago, the Matadors were beat up in the rebounding column where the Titans held the edge, 37-28. This means senior forwards Stephen Maxwell, Devonte Elliott and Stephan Hicks will need to combine for more than 15 rebounds in their second matchup against the Titans.

A closer look in the paint also shows a crucial matchup between CSUN junior forward Tre Hale-Edmerson and Titans’ senior forward Steve McClellan. In the last matchup, McClellan took Hale-Edmerson to the cleaners, scoring 15 points and 14 rebounds, as opposed to three points and three rebounds from Hale-Edmerson. He will need to be more active this time around if the Matadors hope to win this game.

“The last two times we played them, he [McClellan] just had his way his way with Tre around the basket,”Theus said. “A lot of it falls on his shoulders.”

The burden does not fall solely on Hale-Edmerson’s shoulders though, as the Matadors will need Hicks and Maxwell to provide scoring throughout the game.

“Gotta get a win,”Hicks said. “That really determines who goes to the tournament. So just gotta go for the win, go hard from the start, play a 40-minute game.”

But in the first matchup against the Titans, the Matadors couldn’t run for the duration of the game and fell victim to fatigue again, as they slogged their way to an 18-50 shooting night.

As Thursday night’s matchup with Cal State Fullerton approaches, CSUN will still be missing the same seven players that have been out for essentially the whole season, but in a game this crucial, the Matadors cannot let fatigue get the best of them this time around.

“Hopefully the fear of not [making it] is enough motivation already,” Theus said, when asked how he’s prepared his players to power through fatigue.

In addition to the scoring CSUN will look to Hicks, Maxwell and Elliott to provide leadership in the biggest game of the year.

“For the seniors, it’s one of the biggest games of their careers,” Theus said.

Although the Matadors have had one of the worst seasons in school history, they still control their own destiny in the Big West.

“It’s really on them,” Theus said. “Fullerton is not better than us.”