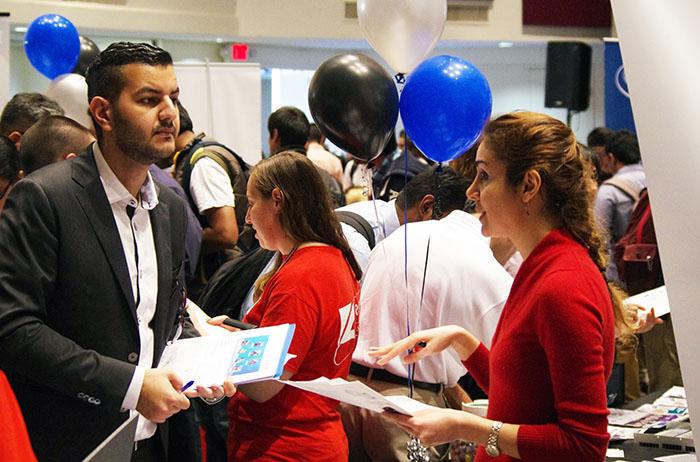 With over thirty different companies in attendence, students network and mingle at Techfest at the Northridge Center on Feb. 25th, 2015 (Matthew Delgado / Staff Photographer)

Behind CSUN’s Techfest hides a winning formula; students get experience in the tech world straight out of college. By holding a festival to introduce students and employers, CSUN helped create a vast network of technological connections.

Techfest is really successful when it comes to the startup companies that are seeking non-experienced students.

“I know a lot of guys here are for software or mechanical engineering and we’ll take everybody and anybody,” said Gal Lis, a representative from IT Creations. “We can train them in a couple of weeks so it’s not a big deal.”

It’s hard for students to find a way into such a competitive industry and Techfest helps guide them in.

“I’m looking for an electrical engineering job, specifically in the field of digital design or computers,” said Chris Pineda, a recent CSUN grad. “At the end of the day I hope to get my resume out there and hopefully get a few call backs for interviews.”

However, Techfest’s appeal doesn’t only come from its networking. Techfest has companies with new and innovative ideas, which can also draw in students looking for something different.

“We have one product in production right now, which is a fly-wheel system,” said Omar AlShahrani, an engineer from Kinetic Traction Systems. “It helps regulate stability on trains when they need it. They’re not on the trains, they’re on the track sides.”

Simple ideas such as this are great places for students to start. There are also more specific companies catered to a certain area.

“We are a web development site that deals with the high-end watch industry business,” said Sumant Vasan, the Director of iShowcase. “Everything that we do is custom and we’re actually the forefront in our industry.”

The Techfest is a place for students with any interest in technology to begin networking and become familiar with the business. Where most students thrive is the willingness to learn, absorb the knowledge they’re given and use it to innovate the tech industry.

Techfest gives both students and employers the opportunity show off their skills and get their name out there.