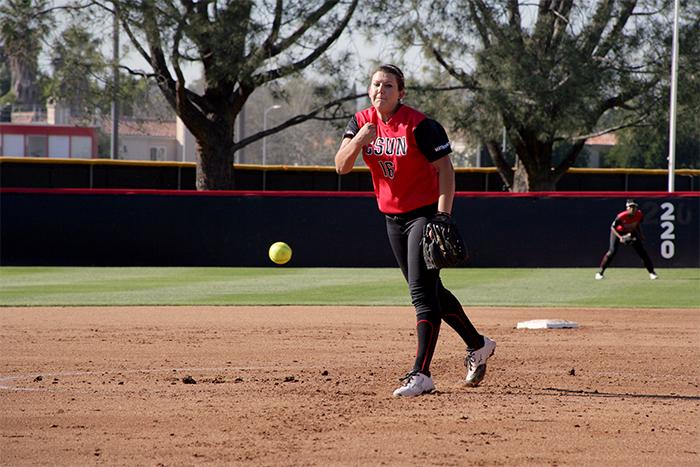 Brianna Elder pitched a solid four innings and held the opposition to just one run as the Matadors defeat Utah Valley College in the second game of a double header on Wed. Feb. 25, 2015. Raul Martinez/Staff Photographer Photo credit: Raul Martinez

The Matador’s (15-3) rode a wave of strong pitching, led by a phenomenal performance by freshman pitcher Zoe Conley, to sweep their double header against Utah Valley University.

The Matador’s earned a 3-0 victory in the first game of the afternoon behind the first no-hitter thrown by a Matador’s pitcher since 2008. Zoe Conley fanned 16 out of the 21 Wolverine batters she faced, in the process extending her scoreless innings pitched streak from 14.1 to 21.1 and grabbing her sixth win of the season.

A big third inning for the Matadors helped seal a 6-1 win for the Matadors and Senior Pitcher Brianna Elder. Elder, who tossed four innings on the mound, combined with sophomore pitcher Daphe Pofek for two hits allowed and seven strikeouts. It was Elders sixth win of the season and Pofek’s second save of the young campaign.

“We have six pitchers that can throw so you’re always aware of who works best in what inning and pitch count,” said Head Coach Tairia Flowers. “We talk to our pitchers all the time about working as a staff and everybody contributing and growing off each other.”

The Matadors took the lead early in the first contest. Sophomore center fielder Taylor Glover knocked in the first run of the day, courtesy of a ground out to second base, scoring sophomore right fielder Clarissa Sherman.

CSUN, who had little offense from the Wolverines to compete with , scored the second of their three runs during the bottom of the third. Freshman short stop Savannah Horvath slapped the first of her four RBIs on the day, through the right side of the infield, scoring Glover.

In the next inning, with the base loaded, Utah Valley University’s sophomore pitcher Bailey Moore gave freshman catcher Courtney Horne a free pass, forcing home the Matador’s final insurance run of the game.

After a short intermission, the second game of the day saw slightly more offense from both teams.

Utah Valley University sophomore left fielder Brianna Gatlin hopped on a floater from Elder, sending the pitch over the right field fence and plating the Wolverines only run of the day.

The Matadors tied things up in the next inning. Sherman, who had five hits between the two games, used what Coach Flowers referred to as “aggressive base-running” to generate the matador’s first run of the game. The lead-off hitter got things started with a double to center fielder, before advancing to third with a stolen base in the next at bat. Shortly after Sherman took advantage of a dropped pitch, crossing the plate in the process.

“As a lead-off batter i’m trying to see pitches,” said Sherman.”To let the team know what this pitcher is going at and put the ball in play and make the defense work.”

The Matadors piled it on in the third inning thanks to two big home runs. Sophomore Katie Hooper knocked a solo shot over the left center fence to bring the lead to one. three at-bats and a pitching change later, Horvath extended the lead to four with a three-run home rundown the left field line.

“I think so far, we’ve been finding ways to get runs going and making sure that we execute when we have runners on third and second,” said Conley. ” Just make sure that we don’t leave as many runners on base as often as we have in the past.”

CSUN grabbed an insurance run in the fourth inning on a throwing error to bring the score to a head at 6-1. The win was the Matadors seventh in a row.

Northridge will return to the field on Friday to play host to visiting Sacramento State (3-8) at 12 am, followed by a game against California State University Bakersfield (4-8) at 2:30 pm.