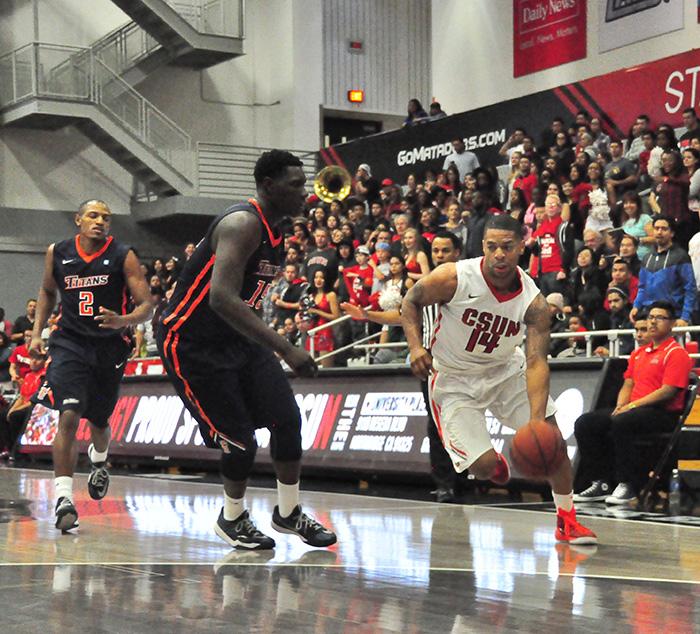 Sophomore guard Aaron Parks drives past a Cal State Fullerton defender in the closing seconds of an 82-72 CSUN victory at the Matadome on Feb. 26, 2015. Photo Credit: Andrew Martinez / Editor-in-Chief

The Matadors are finally beginning to resemble a team that deserves to play in the Big West tournament after spending the brunt of the season barely holding onto the final qualifying spot for the tournament.

“Walking into the locker room with a win, it sure beats the hell out of walking in there with a loss,” said Matadors’ head coach Reggie Theus, with a sigh of relief followed by a laugh.

With a berth in the Big West tournament essentially on the line, the trio of senior forwards Devonte Elliott, Stephan Hicks and Stephen Maxwell, finally imposed their will collectively, and carried the Matadors to victory.

“I thought that all three of our seniors, did a great job tonight,” Theus said. “They really showed up. I thought that they played with passion.”

The Matadors needed a second half surge by the seniors due in large part to a sluggish start on defense, where they provided very little resistance in the first half.

Because of the Matadors’ lackluster defense, the Titans were able to jump out to a 31-19 lead behind senior guard Alex Harris, who finished the first half with 10 points, six assists and five rebounds.

Despite allowing Cal State Fullerton to shoot 61.5 percent from the field in the first half, the Matadors were able to head into the locker room only trailing by four because of a late spurt by Maxwell and Hicks, who combined for 11 points in the final six minutes of the half.

Following the halftime break, the seniors took matters into their own hands and spearheaded one of the best defensive halves the Matadors have had all season.

In the second half, the Matadors keyed in on Harris, forcing him into eight points on 2-8 shooting in the half.

With Harris out of his groove, the Titans did not have an answer for CSUN’s defensive pressure and intensity, shooting only 12-31 from the field and 2-9 from the 3-point line in the second half.

“I thought we defended about as well as we have all year when it comes to the 3-point line,” Theus said.

The defensive stops gave the Matadors the confidence they needed to right the ship on offense as well.

“They played defense first, and they used the defense to spur the offense,” Theus said.

A substantial portion of that offense came from Devonte Elliott, who sat out most of the first half due to foul trouble. Elliott came out in the second half and took advantage of his height en route to eight points and six rebounds.

“I just wanted to come in with energy and join the party with my team,” Elliott said.

Although Elliott and Maxwell provided crucial buckets down the stretch, none were bigger than Hicks’s 3-pointer from the right wing, to put the Matadors up 57-55 with 7:11 left in the game.

Once Hicks drained that shot and the Matadors completed the comeback, CSUN reached an extra gear on both ends of the floor. The Matadors followed Hicks’s three with three straight defensive stops and six more points, to stretch the lead to eight, which proved to be too much for the Titans to come back from.

Unlike so many times this season, the Matadors were able to come alive in the second half, finish a run and ultimately finish a game.

“We had to have this game,” Hicks said. “It started from tip to finish, we played a 40-minute game.”

Even though this victory was a big step in clinching a Big West tournament berth, the Matadors still have work to do as they face the UC Riverside Highlanders at 7 p.m. Saturday at the Matadome.