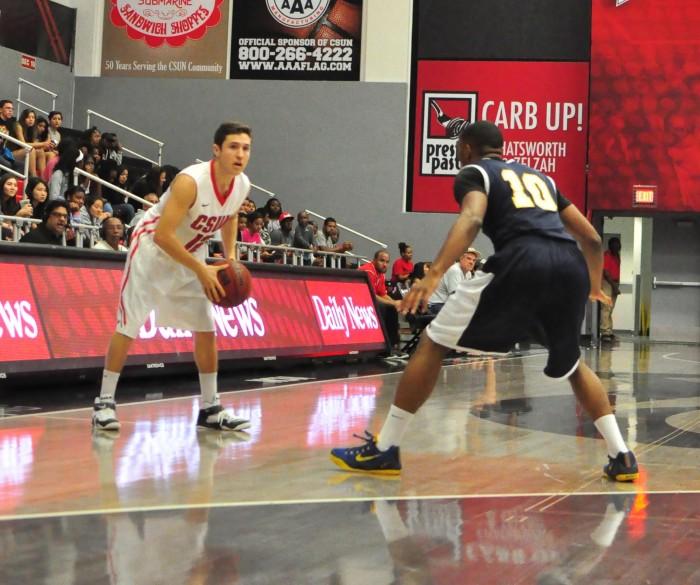 Following their first conference victory in their last 10 tries, the Matadors (8-22, 3-11 Big West) will look to keep the momentum going and clinch a spot in the Big West tournament with a win over UC Riverside on Saturday in the Matadome.

“The fact that we’re still not mathematically out of the woods, they need to know that,” CSUN head coach Reggie Theus said following Thursday night’s victory over Cal State Fullerton. “Every game, every possession, is important to us. Saturday’s game is just as important as tonight’s game.”

In what will be the final game at the Matadome for seniors Robert Cid, Devonte Elliott, Stephan Hicks and Stephen Maxwell, they will be looking to end their careers with a victory at home.

“It kinda went by really fast,” Elliott said on Thursday. “I can’t believe that this is our last game here in the Matadome, but I just look forward to taking advantage of it. I just want to end on a high note.”

The last time CSUN played UC Riverside, the Matadors were hampered by turnovers, and fell 66-62. In this matchup, they cannot afford to give up the ball more than twice as much as the Highlanders, like they did in their first game (15-7).

In addition to valuing possessions, the Matadors need to improve on keeping UC Riverside junior forward Taylor Johns in check. Johns exploded for 27 points on 50 percent shooting from the field, as well as 13-13 from the free throw line, in his first game against CSUN this season.

Aside from turnovers and defending Johns, the Matadors should look to replicate their first performance against the Highlanders, where they shot 50 percent from the field, 57 percent from the 3-point line and outrebounded their opponent 33-30.

This matchup will also feature a red-hot Aaron Parks, who has scored in double figures in every game (seven games) since he scored only seven points against the Highlanders. Parks’s new-found groove, along with Maxwell’s and Hicks’s recent reemergence (combined for 46 points in their last game), should give UC Riverside fits.

Another aspect to keep an eye on is whether or not CSUN can keep the Highlanders off of the free throw line, while concurrently getting to the line themselves. At Riverside, the Highlanders went to the line an astonishing 31 times, while the Matadors mustered only 12 attempts that night.

However, the Matadors seem to have found their aggressiveness after shooting 26-30 from the charity stripe against Cal State Fullerton.

Although the Matadors gave themselves some breathing room in the standings after beating Cal State Fullerton, they cannot take the Highlanders lightly if they want to guarantee a postseason berth.