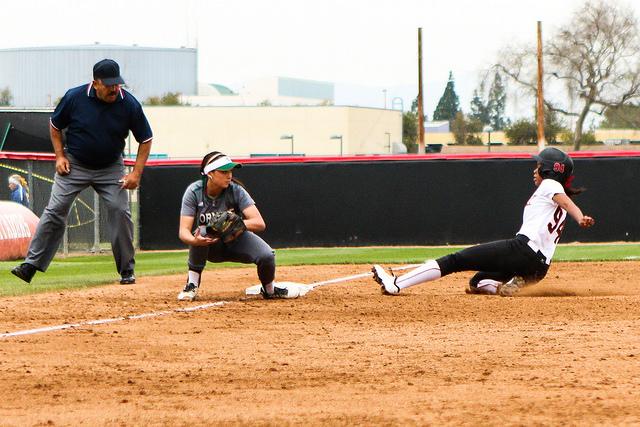 The Matador’s split their double header to open the CSUN/LMU tournament after securing an 8-0 win against Sacramento State, before dropping a 7-6 heart breaker to CSU Bakersfield later in the afternoon.

Five innings was all it took for the Matadors to put the nails in Sacramento State’s coffin. The Matadors were awarded the “mercy rule” victory behind another strong pitching performance from freshman pitcher Zoe Conley. Conley extended her scoreless innings pitch streak to 25.1 innings, en route to her seventh win of the season.

The Matadors hit the ground running in the first inning. Sophomore right fielder Clarissa Sherman, who got things started with a lead-off triple to right center fielder to start the game, scored the first run of the game thanks to a double off the bat of sophomore center fielder Taylor Glover.

Not to be left out, Sophomore catcher Katie Hooper plated an RBI of her own in the next at-bat, scoring Glover. Freshman Courtney Horne was responsible for the last CSUN run of the inning, driving home Hooper and bringing the lead to three.

Sophomore Taylor Nate brought the power for Northridge. The left fielder cranked a towering home run over the right field fence in the bottom of the third, extending their lead to four. In the next inning, CSUN rallied for four runs, two of which came courtesy of Nate’s second home run of the game, a two run shot to left center.

Senior pitcher Jordan Sauceda was called on in the fifth to relieve Conley and close the door on the visiting Hornets. Sauceda and company refused to yield a run to their opponents, forcing the officials to call the game per NCAA rules and regulations at a score of 8-0.

The Matadors had their hands full in the next contest against the California State University Bakersfield Roadrunners.

Due to tournament structure, the Matadors were considered the home team and were allowed to take their hacks at the dish before Senior pitcher Brianna Elder took the hill.

Like their previous game, the Matadors struck in the first inning. Sherman flashed her speed, manufacturing the Matadors first run off a wild pitch from the roadrunner’s senior pitcher Kelsie Monroe. The Roadrunners tied things up in the bottom of the frame off a RBI single.

Freshman shortstop Savannah Horvath supplied two of the three runs the Matadors would score in the second through fourth innings. Horvath singled up the middle in the second, scoring one, before launching a huge lead-off home run over the left field wal in the top of the fourth, bringing the score to 4-1.

The Roadrunners took a one run lead into the later frames after a big four run rally in the bottom of the fourth. Sophomore pitcher Daphne Pofek was called on to relieve Elder, but after some early trouble Elder returned to the hill to get her team out of the jam. After two roadrunner RBIs, Conley was summoned out of the dug out to stop the bleeding. The Roadrunners managed one more run before the Matadors closed out the inning, leading the score at 5-4.

In the next at bat, Hooper hit her second home run in as many games to help CSUN put some distance between themselves and Bakersfield. However, some late inning heroics by the Roadrunner’s sophomore first baseman Karsyn Guzman proved too much for CSUN, as Bakersfield completed the 7-6 walk off victory, snapping Northridge’s eight game winning streak.

The Matadors will return to Matador Diamond Feb. 27 at 1:30 pm to take on the College of Charleston Cougars.