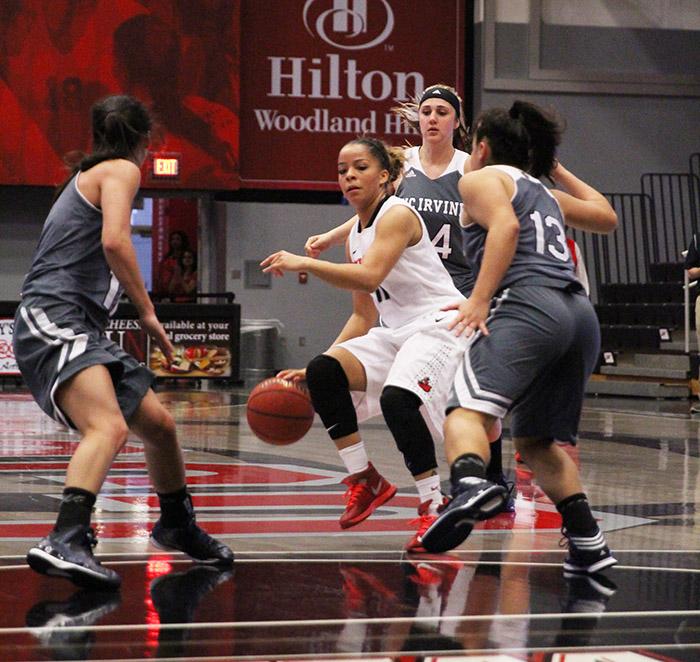 Senior Cinnamon Lister looks for a way past three UC Irvine defenders during the second half of the Matadors game on Feb. 21, 2015. (Trevor Stamp / Multimedia Editor)

The Matadors (20-9, Big West 10-5) captured their sixth straight victory with a dominating 88-70 victory over UC Riverside.

Coach Jason Flowers said he told the team the victory has been the best game the Matadors have played thus far this season.

“I thought there was some adversity in the second half that we overcame as a group,” he said. “And they just made a decision that there wasn’t going to be a reason why we lost the game.”

Northridge started the game with full court pressure as CSUN was able to come up with defensive turnovers which lead to easy offense. Ashlee Guay, who finished with 33 points and six rebounds, led the charge with consistent drives to the basket for uncontested layups and set her teammates up.

Riverside managed to counter with its biggest offensive weapon, Brittney Crain. Midway through the first half. Crain scored eight unanswered points to give UCR a 21-20 lead. She finished with 22 points.

Flowers said when a team faces a shooter like Crain, the team has to know that player is going to make some shots.

“You have to try as much as possible to make all of (the shots) difficult,” he said. “I thought in the second half we did a better job at making it tough for her.”

“We knew we had to attack them because they were trying not to foul because they didn’t want to get into foul trouble like we were,” Guay said. “We had to make sure we were attack, not just shooting from the outside.”

Guay and the Matadors were unstoppable in the second half as CSUN was able to dominate on the offensive end.

The senior continued to drive through UCR’s defense and make layup after layup while Janae Sharpe, who had 11 points, seven rebounds and six assist; Emily Cole, 12 points; and Camille Mahlknecht, 10 points, helped pushed the Matadors lead into double figures.

“We stopped playing tentative,” Guay said of CSUN’s second half adjustment. “We started wanting to score, wanting to go get the ball; we were playing our game and doing what we were supposed to do.”

“It is funny, because coach always says ‘when we listen and we apply – things always work.’”

“At the end of the day, it doesn’t matter what’s going on – on the floor,” he said. “We can only control over things that we have control over and that’s our attitude and our effort.”

“Despite what was going on, despite all the other stuff, despite being on the road and despite being down, the team just came out and made plays and executed.”

Although the team has won six consecutive games, CSUN is not finished just yet. Flowers said the team is finally doing the things it needs to accomplish the goals Northridge set out at the start of the season.

“I think that every team has its journey and every team has its up and downs,” he said. “It is a testament to our kids, to who they are, their character – that they always find a way to dig deep and overcome whatever obstacles that are placed in front of them.”

Guay said it feels great to have a winning streak as the playoffs emerge from the horizon.

“We have to stay focus though and have good practices,” she said. “We just have to keep doing what are doing and it will all fall into place.”

The Matadors conclude their season at 7 p.m. against Cal State Long Beach on March 5 at the Matadome.