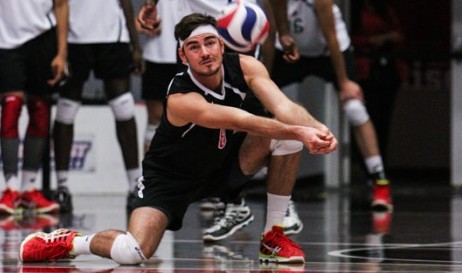 Set one began with a kill from the Matadors’ sophomore opposite hitter Jakub Ciesla, but was then followed by a service error. Once the set was tied at nine, the Matadors went on a four point run giving them a 9-13 lead. CSUN maintained their lead and with an overwhelming five point run at a 14-17 score, the Matadors allotted the Bruins just two more points (service error, Bruin kill) until they took their 25-16 victory. The Matadors hit .417 and had 11 kills in the set.

Six score ties and two lead changes came in the second set. The Bruins began to pull away from the Matadors when they took a 12-10 lead. It was then two and three point runs that won the set. CSUN hit .320 in the set, with 10 kills.

UCLA took an early lead over set three, getting a four point lead within the first ten points, 6-2. The Matadors tied it at 13, with a block by freshman middle back Josiah Byers and sophomore setter John Peachey. The Bruins maintained their lead and despite several three point runs, the Matadors fell 25-22. Hitting .194, the Matadors had 13 kills, the highest of all four sets.

In the final set, CSUN started strong and with the score tied at five, went on a five point run to make it 9-5. The Matadors kept held strong to their lead, until the Bruins tied it at 18. They then went point for point until a final Bruin kill ended the set 23-25. CSUN hit .250 in the final set and had just 11 kills with one service ace.

Ciesla lead the Matadors in kills with 15 (.361) and added one service ace. Senior outside hitter Kyle Stevenson had 13 kills (.212) and sophomore outside hitter Bradley Sakaida contributed nine kills (.286). Peachy had a career-high 39 assists with 13 digs.

The Matador offensive leader, Sam Holt, did not start against the Bruins, nor did he see any court time. The junior outside hitter suffered an injury midway through the final series against Hawai’i, according to Gomatadors.com.

CSUN continue their road-trip to Cal Poly Friday evening, before taking on Penn State as part of the Active Ankle Classic in Long Beach on March 13 at 5 p.m.