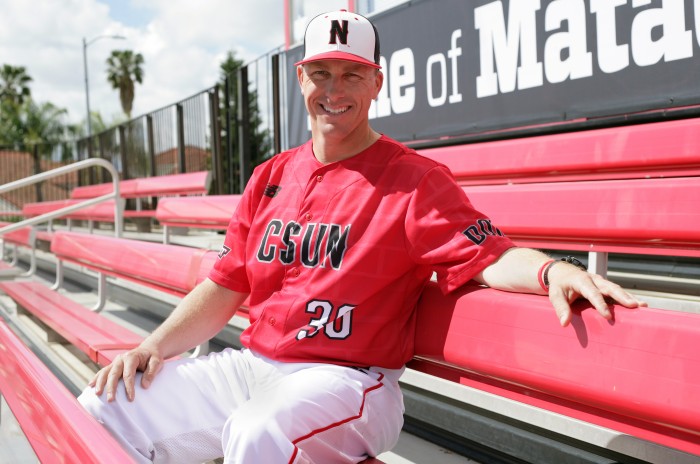 With a grand resume under his name, CSUN baseball head coach Greg Moore has earned accolades even before his stint with the Matadors. As successful as he was a player and a coach in northern California, Moore was named as the pitching coach this summer for the 2015 18U National Team on Jan. 8.

“It’s an honor to be asked,” Moore said, who is entering his second-year as CSUN baseball head coach. “I’m excited to be apart of it.”

He previously worked as an assistant coach at the 2014 Tournament of Stars last summer and the 2014 USA Baseball 18U National Team Trials in Houston.

“The 2015 U-18 National Team is in great hands heading into the World Cup,” said USA Baseball’s CEO Paul Seiler in a press release. “Our 1U-18 director, Shaun Cole, has assembled an impressive staff of coaches with experience with our organization and a pedigree of success with a World Series MVP, a successful division I head coach and two nationally recognized high school coaches.”

Moore will be joined in the dugout by Glen Cecchini, a Louisiana high school head coach who has worked with the U-18 National Trials in the last two seasons, David Eckstein, former World Series MVP and two-time All-Star, and Eric Kibler, the head coach at national power, Horizon High School in Scottsdale, Ariz.

The new U-18 pitching coach has been coaching baseball for 16 years and he was previously the associate head coach at the University of San Francisco for three years before his CSUN tenure, where he was named by Baseball America as one of the Top-10 Assistant Coaches in College Baseball.

The veteran coach played at the University of San Francisco and was named to the West Coast Conference All-Academic Team in 2001. As a player, he won the team’s “Most Inspirational” award in back-to-back seasons and now the award bears his name.

“The fall is going to be interesting because I won’t be here when the team comes together for the first time,” said Moore as he attempts to deal with CSUN baseball while he’s away for the summer. “It won’t be the traditional way of finding the right people for this program.”

Senior pitcher Jerry Keel spoke highly of Coach Moore as he mentioned that not only does Moore focus on baseball, but his main focus is academics and making sure the players are set up for life after baseball.

“He’s probably the best coach I’ve had since I’ve been here,” said Keel. “He’s somebody that wants to improve you as a person and cares so much about academics and truly wants you to put that first in front of baseball.”

Fortunately, Moore has a great supporting cast of coaches to where the Matadors won’t miss a step while he’s gone. The assistant coaching staff is led by Jordan Twohig, the recruiting coordinator and hitting coach for the CSUN baseball team.

“What separates Coach Moore from anybody is his attention to detail and his willingness to listen,” said Twohig who has known Coach Moore for 12 years, not only as a colleague, but someone he can call a friend. “He’s a teacher, he’s a student of the game and he’s always thinking about the person first. He’s the first to extend a hand as far as a handshake and the last to leave the field if there is a conversation going on.”

Coach Moore is a competitor on and off the field and coach Twohig firmly agrees.

“He competes in everything he does, whether it’s working in the office,” said Twohig. “Being a father, a husband and being a head coach in working with these young men out here.”

In the meantime, Coach Moore’s main focus will be on the CSUN Baseball team collectively improving.

“It was a great first year to be able to build the culture and get established of what we would like to build here for years to come,” said Twohig.

After finishing eighth in the Big West Conference last year, the baseball team is 11-3, their best start since 1996.