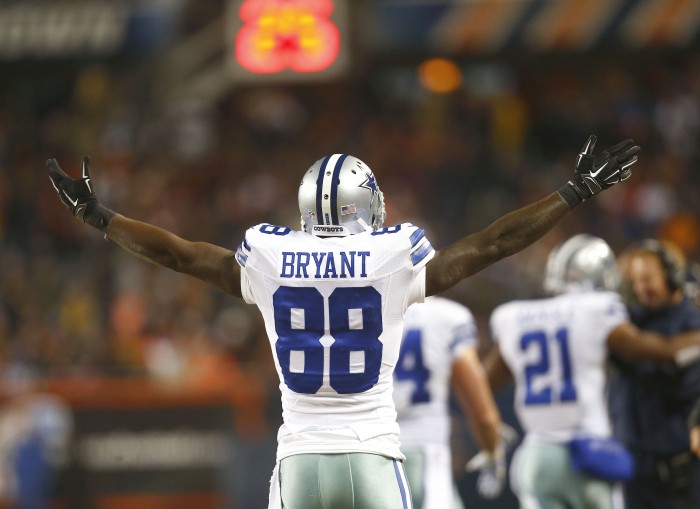 Dez Bryant, who was recently franchised by the Dallas Cowboys, may get much more out of his season with the new cap space for each NFL team. Photo courtesy of TNS.

The glare from Dez Bryant’s diamond studded earrings is hard to miss from the Dallas Cowboy’s sideline as he stands with helmet in hand watching the defense go to work on game days.

Bryant can continue to buy all the jewelry he wants. For the 2015 NFL season, Cowboys number one wide receiver will make $12.8 million. Not that he was suffering.

On Monday the NFL has yet again increased the team salary cap for the ninth time in the last 11 years; 2010’s uncapped season and the 2011- 2012 homestay at $120 million are the only exceptions.

The cap is now $143.28 million, which is more than the estimated amount made back in December of $138 million and a $10 million increase from last year. Due to last year’s carryover cap space, most teams will be subject to different spending amounts.

For example the Arizona Cardinals, whose 2014’s cap space was $4.2 million, now has a 2015 cap space of $147.5 million. The Jacksonville Jaguars were able to add $22 million to the new cap space to increase their team cap to $165 million, the largest amount in the NFL.

This allows players like Bryant to not only increase the possibility of signing bigger contracts but to continue to be properly compensated from the continually growing revenue that individual superstars bring to the league and teams respectively.

The Cowboys are now worth $3 billion, the first U.S. sports team to hit that mark, according to Forbes.

As a two-time Pro Bowl selection and 2014’s receiving touchdown leader, Bryant’s on the field performance plays a role in maintaining the Cowboys reputation as America’s team, therefore having a positive impact on merchandise and ticket sales.

For years, sport franchises have been criticized for their athletes’ lucrative contracts. Some deem them as unnecessary, especially after looking at the outlandish lifestyle that a lot of today’s athletes embrace.

However, the money continues to flow in from one of the richest sports. The 2015 Super Bowl broke last year’s record with 114.4 million views as the most watched program, 2014’s record holder was also the Super Bowl.

The NFL proves to have the funds to pour money into their franchise and with record breaking statistics, players will be rewarded for their effort.

Bryant was recently placed under a franchise tag by the Dallas Cowboys, which was also adjusted to reflect the new salary cap increase.