Spiritual guidance and advice from SoulPancake 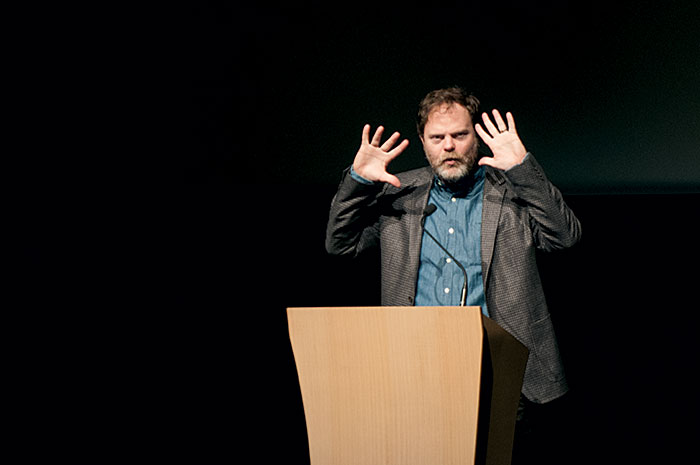 Wilson answered questions from students about life after college, finding yourself and differences in religion. (Cladellain Kae David / Photo Editor)

CORRECTION: An earlier version of this story incorrectly stated that Associated Students presented a thank-you gift to Rainn Wilson. Members from the University Student Union presented Wilson with the thank-you gift.

Rainn Wilson, from the NBC television series, “The Office”, signed autographs, answered questions and spoke about his spiritual life journey and project, SoulPancake, at CSUN Tuesday.

Wilson said SoulPancake was created for people to talk about and explore life’s big questions, such as love, faith and death.

“We don’t have any answers at SoulPancake,” Wilson said. “It’s up to everyone to find answers.”

Born to artsy and hippie parents on a houseboat, Wilson was raised on the Baha’i faith. “It was a loving and wonderful religion to grow up in,” he said.

After he graduated from college, Wilson strayed from his faith and decided his main goal in life was to change the world through theater and art.

Wilson said that when he was in his mid-twenties, he found himself making money through acting, which was exactly what he dreamed of doing. Despite living his dream, he discovered that he was unhappy.

Due to his unhappiness, Wilson went on a spiritual journey to discover what he believed to be true about life and what his purpose was.

After his journey, Wilson found himself returning to his Baha’i faith and felt a deeper connection to it.

Wilson encouraged the audience to “find the truth” in their lives, and separate from what exists in our culture.

Wilson showed an emotional yet uplifting video montage featuring young people with terminal illnesses who were living out their last days in the best ways they knew how.

One of the young men in the video said “you don’t have to be told you are going to die to start living.”

The video received a round of applause from the audience.

Wilson said that death was his favorite topic to discuss, as it is “something we all have in common.”

“[Wilson’s] perspective on death was really interesting,” said senior deaf studies major, Emily Tierman. “A lot of people think of death as really depressing but he had a more positive [perspective] on it.”

Jenny Cho, senior art major, said that Wilson’s talk was “very enlightening” and made her “more conscious about what’s around [her].”

Wilson credited his high school drama teacher, Mrs. Adams, for telling him that he must pursue acting as a profession.

“If it weren’t for her, John Krasinski would be here talking to you instead. He’s hotter than me,” Wilson said, as the audience laughed.

Wilson also spoke about the pursuit of happiness, saying that it isn’t something that can be pursued.

“There is this myth in our culture about happiness and that it’s something that can be attained,” Wilson said. “Happiness is something that you make a decision about on a momentary basis.”