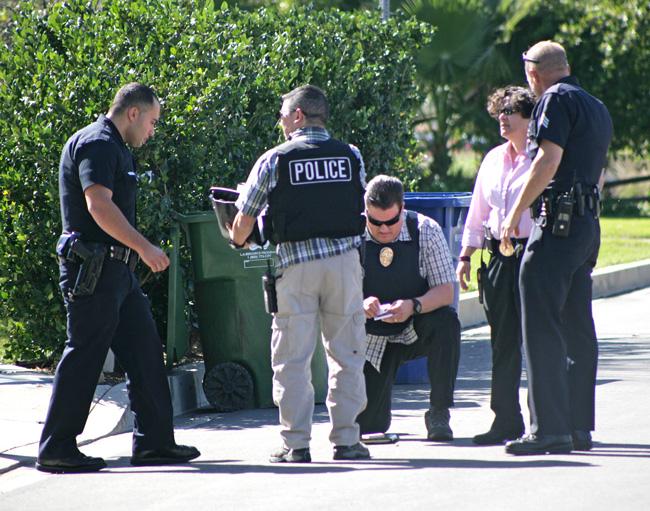 Shots were fired near campus by University Park Apartments earlier this afternoon as police are going door-to-door in student housing searching for suspects described as two African American males, according to campus emergency notifications. One is wearing a baseball cap and the second suspect is wearing a white shirt, white pants, and white shoes. No reports of injuries so far.

The altercations at the residential home across the street have been confirmed, and the shots fired were confirmed by shell cases on the ground, Police Chief Anne Glavin said in a press conference.

“I was walking back from the library and I heard three shots and saw three guys run across the street at separate times,” said CSUN sophomore Kenny Rosenberg. “Called the police, they came and responded pretty quickly, it doesn’t sound like they found anyone but everyone’s all right.”

Streets were blocked off by cones and cops swarmed the street with caution tape everywhere. At least 10 patrol cars surrounded the corner of Lindley Avenue and Kinzie Street as students were witnessing the scene outside their balconies. Stella Lee, sophomore, arrived in the third floor at her dorm and says she came in right when the notification hit, seeing police going in and out of rooms.

“I saw no suspicious activities during the week that could lead up to this,” Lee said.
“I was a little scared but I’m not afraid to be inside the dorms.”

Students are still being advised to avoid the area of University Park Apartments, but the campus is not on lockdown. Call (818) 677-2111 or 911 if you see persons matching this description.

The suspects, who fled the scene, are described as two African American males – one wearing a baseball cap, the other wearing a white shirt, white pants and white shoes.

Resident advisors (RA) have been ordered to lock doors and not go out or let anyone in.

The Residential Life office has advised all RA and mentors to knock on doors in the building and tell people to stay inside and not leave the building.