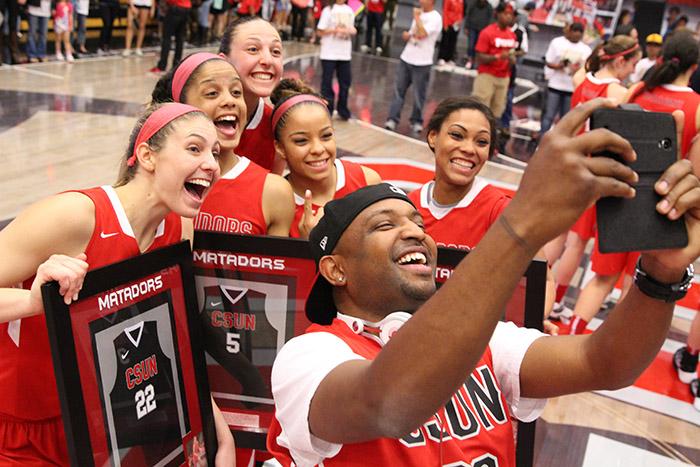 In the final regular season game of their college career, CSUN’s senior starters performed like champion matadors, dancing around a tired-old bull not ready to meet its end.

CSUN put down the California State University, Long Beach 49ers 77-61 Thursday in an emotional senior-tribute that saw off their starting bench and championship players.

“I’m proud that they sent the seniors out with a victory,” CSUN head coach Jason Flowers said. “These seniors have worked their butts off since stepping foot on campus.”

Long Beach took the scoreboard early in the Cal State battle, but it was short lived and CSUN’s senior starters came out with a tenacity that soon left CSULB trailing.

The Matadors just refused to give up a play against Long Beach, even if that meant throwing a pass off an opponent to hold onto possession. CSUN walked away with 15 points from second chances and secured 33 defensive rebounds.

Their defense was unrelenting and as soon as a hole opened it quickly closed. Northridge effectively shut down Long Beach’s deadly 3-point shooter Lauren Spargo, who is ranked fourth in her team’s history for threes.

The five-foot-11-inch guard managed one 3-pointer against CSUN that landed in the first half and after she only put up shots from within the paint.

“Our game plan is always the same in taking away what individual players do best,” Flowers said. “In order to do that it takes all five people on the defensive end.”

Northridge, having locked down Long Beach’s game, led by 22 points at their peak and closed with a 16-point lead over the fellow Cal State team.

But with this win, also came the hard reality of a career coming to a close, and for all five of the starting players who led the team to the NCAA Tournament for the first time in nearly a decade last year — this was the last CSUN home-game of their lives.

“It’s crazy to think that’s the last time I’d ever play on that court,” Guay said. “It’s an overwhelming feeling.”

Guay is possibly the best player in the program’s history. She holds title after title, record after record and a reputation for opponents to respect. Last week she broke the all-time scoring high for her team and a personal game-point high as well.

But for all of Guay’s majesty on the court, she is not without diligent support from team members.

Senior guard Cinnamon Lister, has a knack for 3-pointers. She put up two against Long Beach Thursday night and holds a record for 89 long shots in a single season for her team.

Janae Sharpe is a guard who can not only shoot, but rebound and carry the team during critical moments. At the Big Dance last year against the University of Southern Carolina, she gave the much taller team a run for their money in the final moments, even though victory looked impossible.

On the defensive end, CSUN will also be losing two valuable players that supplemented the guards to victory on numerous occasions.

Coach Jason Flowers once described Randi Friess as the “glue-guy” on the team — the person who holds everyone else together and does the things no one else is willing to do. Against Long Beach she landed a three, rare for the forward, and a shot from within the arc.

“The thing with me is that it is all mental,” Friess said. “I just have to keep telling myself to be aggressive and have a scoring mentality.”

Fellow rebound warrior, center Camille Mahlknecht, will also be leaving the team this year. The six-foot-two-inch senior from Agora Hills, California was named last year’s Big West Defensive Player of the year and holds a school record of 105 blocked shots for a single season.

Though next year will be a whole different story for CSUN’s champion women’s basketball team, the ones who built it up from years of a mediocre play still have a few games left until then.

The Big West Tournament starts next week and CSUN will have to prepare as the seeds fall into place, if they have any hope of making back to the NCAA Tournament.

“I’m so focused on our upcoming games right so I haven’t had much time to think about my career ending,” Friess said. “We have such unfinished business right now.”

CSUN has secured the second-seed in the tournament and follows the the University of Hawai’i who has been on a winning streak for the past two months. They secured the 2014-2015 outright championship for the conference last week.

CSUN beat Hawai’i Jan. 10 in their second conference game for the season 53-46, but the island team came back Jan. 31 to put Northridge down.

The Big West Tournament begins March 10 and will be announced later next week who CSUN will face off against in the first semifinal game March 13.

“We’ll be ready to play for whoever it is,” Flowers said. “Our mindset is to play the best we can play.”