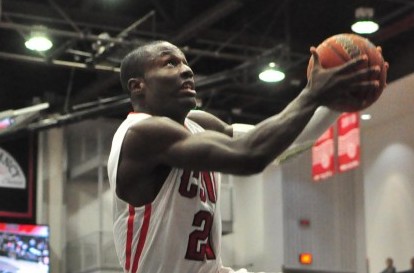 The Matadors were unable to keep their momentum going, as their two-game win streak was snapped in a loss to the Long Beach State 49ers, 69-58.

After scoring 80 points in three out of their last four games—prior to their Thursday night match up with the 49ers—the Matadors had a power outage of sorts, as they went 20-53 from the field, including a pedestrian 5-16 from beyond the arc. Furthermore, 41 of the Matadors’ 58 points came from only three players: senior forwards Stephen Maxwell and Devonte Elliott, as well as sophomore guard Aaron Parks, who scored in double figures for the ninth straight contest.

Despite their porous showing from the field, CSUN was still able to demonstrate their signature physicality inside, and went to the free throw line 21 times. However, the Matadors also struggled from the charity stripe, missing eight of those 21 attempts.

In spite of their offensive shortcomings, the Matadors were still able to stay within striking distance of the 49ers throughout the first half, battling back from seven and eight point deficits multiple times, to cut the 49ers’ lead to two or four. As a result, the Matadors only trailed by five at the half, 25-30.

Early on, the second half strongly resembled the first, as the Matadors spent the whole half playing catch-up. Then about three minutes in, the Matadors began to get cold and the 49ers went on a 12-2 run, a run in which the Matadors shot 1-12 from the field.

And with a roster that had only six players who played more than five minutes, CSUN could not climb back into the game after falling behind by 13 points with 12:12 remaining in the game.

Senior forward Stephan Hicks and freshman guard Taelin Webb were not available for this game because of rest and injuries.

“Hicks banged his knee in one of our games. He is pretty sore and kind of weak. Could he have played? Probably,” CSUN head coach Reggie Theus said in an interview with GoMatadors. “But what does that mean for us when the conference tournament starts? It is better to have him 100 percent than to have him 75-80 percent.”

Following a win by UC Davis Aggies on Thursday night, the Matadors now know they will face the top-seeded Aggies in the quarterfinals of the Big West Tournament on March 12 at the Honda Center in Anaheim.