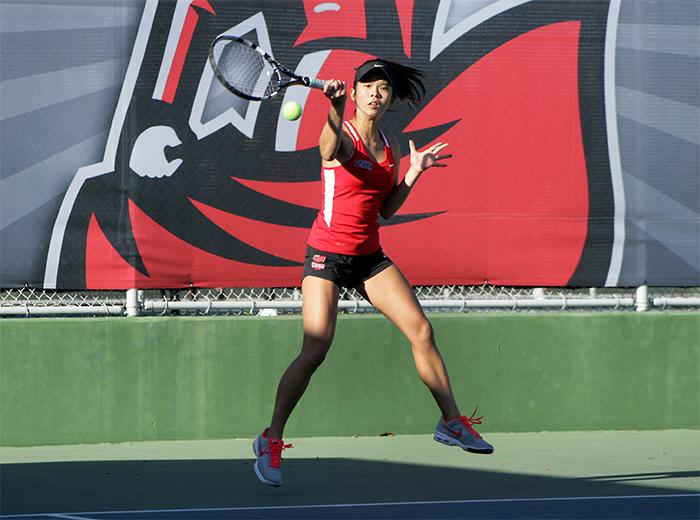 FILE PHOTO - Junior Mickey Hsu was instrumental in the Matadors earning a victory in their home opener on Saturday, Jan. 30. (Raul Martinez / The Sundial)

Three Matadors earned their first victories of the season, and CSUN (6-0, 3-0 Big West) rolled to their sixth straight win to open the season as they swept the Westmont Warriors (6-3, 4-1 Great South Athletic Conference) at Matador Tennis Complex Thursday.

Sophomore duo Mickey Hsu and Kristin Poei improved to 6-0 as a doubles team on the season as they didn’t drop a set to the Warriors’ top doubles team of freshman Ines Costamagna and junior Fernanda Rivera, 6-0.

Juniors Leslie Chang and Samantha Judan, and senior Corinne Schnyder all earned their first singles victories of the season as they all won in straight sets. Schnyder only dropped a single game in defeating senior Emily Keach 6-1, 6-0.

The Nevada Wolfpack (3-6), in the midst of a five-game road trip and a three-game losing streak, are up next for the Matadors today at 2 p.m.