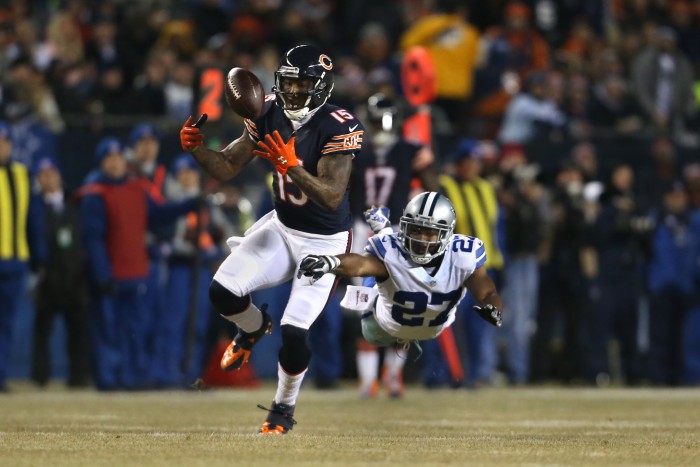 Brandon Marshall has been traded to the New York Jets. How will the former Chicago Bears player do with the re-surging Jets? Photo courtesy of TNS.

The trade will not be made official until free agency starts on Tuesday at 4 p.m. ET and Marshall must pass a physical for the trade to occur.

Brandon Marshall and the Chicago Bears had many differences this past season and him being traded validate those sentiments.

Marshall dealt with pestering injuries all year long halting his ability to perform at a Pro Bowl caliber level. Despite those injuries, he was able to haul in 61 receptions and 721 yards in 13 games.

Marshall has been a consistent 1,000 yard receiver through his nine year career, but despite his productivity his time with the Bears needed to end.

The Bears have been the NFL’s biggest disappointment since Marshall and Jay Cutler signed. They have underachieved despite being a talented football team.

The disputes between the coaching staff and players have been more relevant then their actual play. With the overhaul occurring in Chicago right now, the best move for Marshall and the Bears was to part ways.

At 30-years-old Marshall has a lot left in the tank and the New York Jets might be a perfect fit.

New general manager Mike Maccagnan has an aggressive off-season plan to retool a decimated roster. A dominant receiver is something the Jets have been searching for over the last 5-10 seasons and Maccagnan was able to close the deal.

The Jets have been desperately searching for a number one receiver through the draft or free agency. Former general manager John Idzik signed Eric Decker as a free agent, last off-season, hoping he was the guy, but Decker proved he’s a very productive second option and not a game changer.

Marshall might be the game changer the Jets were searching for. His stats this year would be second, behind Decker, if he was on the Jets roster and remember, this was an off year for him.

He bolsters a mediocre receiving corp. and his presence will immediately change defenses game plans, effectively taking pressure off whoever is the starting quarterback next year.

His signing doesn’t in any way hinder the Jets ability to spend in free agency because Marshall’s salary only counts $7.7 million against the cap, which becomes guaranteed Thursday. The Jets have over $50 million in cap room to spend and if they release Percy Harvin, then the number will increase. The Jets are fortunate to only give up a conditional 5th round pick for a Pro Bowl caliber receiver, in Marshall, who’s only getting paid $7.7 million. So far, this is easily the best bargain of free agency if the deal becomes official.

With all of the negativity surrounding Brandon Marshall and the New York Jets last season, this year both parties can start a new chapter together.