Sand Volleyball: CSUN lose their home opener to No.7 UCLA 4-1 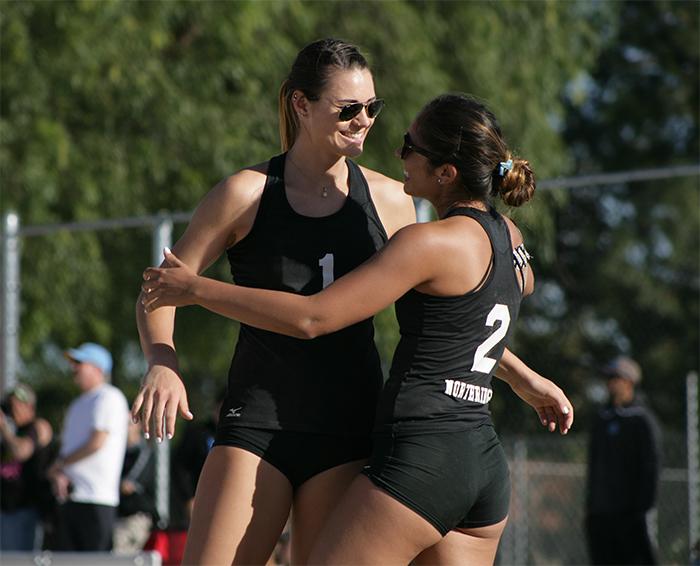 Casey Hinger and Kelcie Randazzo celebrate as they picked up CSUN's only win in the No. 1 match, but the Matadors fell to the UCLA Bruins by a score of 4-1 on Thursday Mar. 5, 2015. Raul Martinez/ Staff Photographer Photo credit: Raul Martinez

In their first-ever home game, the upstart Matador sand volleyball team (0-1) battled perennial sand volleyball powerhouse No. 7 University of California, Los Angeles Bruins down to the last set in a 4-1 defeat on Thursday afternoon.

The sand volleyball facility was opened with a celebratory ceremony by CSUN President Dianne Harrison and Athletic Director Brandon Martin.

“This is the best reception we’ve ever had with receiving complements from everyone,” head coach Jeff Stork said. “They can appreciate what it is that we’re trying to accomplish and they’ve supported us early.”

The no. 1 team of seniors Casey Hinger and Kelcie Randazzo secured the Matadors’ lone win vs. the team of Kamila Tan and Ivey Schmitt 21-17 and 21-14.

“We proved a lot as a team,” Hinger said. “We’re actually going to be on the map. CSUN as a team is really good.”

The team had a heavy influx of indoor volleyball players whose level of experience playing outdoor varies.

Hinger had a legendary indoor career and when confronted with transitioning to outdoor competition, she said she never played sand volleyball growing up.

“We were nervous to start against UCLA but we worked really hard and today we got our sand legs going after practicing for six weeks,” Hinger said.

The second-ranked team of senior Mahina Haina and freshman Katie Sato lost in straight sets 21-8 and 21-17 to Elise Zappi and Madie Smith. Sophomore Julie Haake and freshman Nicolette Pinkney lost 21-19 and 21-18 to the team of Julie Consani and Laurel Weaver in the third ranked match.

“Yesterday in practice was the first time we played together,” Haake said. “We’re never happy with a loss but it was good experience because we were really excited when that first wave finished. You get that nervous, excited feeling before the game which is always good to have.”

Junior Cieana Stinson and sophomore Stephanie Serna lost 21-14 and 25-23 in straight sets in the fourth-ranked match to Karly Drolson and Rachel Inouye. In the fifth-ranked match, junior Alia Casino and freshman Nada Dragovic won the first match 21-16 but were swept in straight sets 21-15 and 16-14 to Kendahl Hettick and Lexi Jasper-Baylin.