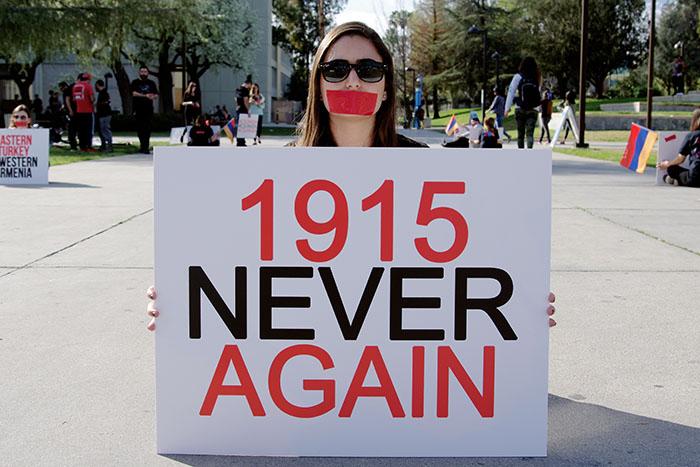 Students partake in a silent protest during the "100 Days of Action," in effort to commemorate the Armenian Genocide in front of the Oviatt Library, Feb. 5, 2015. (Matthew Delgado/Staff Photographer)

Associated Students carried a motion out of the committee to approve SB 2014-15-004, otherwise known as the “100th Anniversary of the Armenian Genocide – April 2015”.

The resolution will now allow AS to conduct a “Tradition of the Rose Ceremony” to all victims of the genocide, have a moment of silence at the AS Senate meeting the week of April 24 and have human rights educators speak and inform senators and students about this tragedy.

Senators have drafted a resolution in commemoration of the 100th anniversary of the Armenian Genocide in hopes of gaining local, state and federal support and recognition.

Members of the Armenian Student Association spoke out to AS during an open forum about the importance of passing this resolution.

“I am passionate on this, it’s who I am,” an ASA member said. “It is important for people to know and recognize what happened to us years ago.”

The proposal of the resolution was brought up in a legislative referral published by Sevag Alexanian earlier this semester.

“This is extremely important to me,” Alexanian said. “We would have a moment of silence and even have students go to classes and educate other students on this matter.”

There are about five Armenian senators on the AS board and a few on AS committees so the importance of approving this topic was heavily discussed and brought to a strong importance. When voting, Senator Dikran Khodanian and Senator Christine Dashdemirians abstained their vote because they felt it would be bias since they are members of ASA. Dashdemirian is the current president of ASA.

Once the AS meeting was adjourned, members of senate and ASA celebrated with applause.

· Approved to allocate $475 out of the $2,650 requested from Unassigned Contingency by Deaf CSUNians for the Deaf CSUNian’s Ambassador Program. This is the second time in the past three weeks Deaf CSUNians have requested large funds from AS for their events this semester.

· Allocated $1800 from Unassigned Contingency to the Balllet Folklorico Aztlan de CSUN for their upcoming event.

Economics and Karissa Masmela to Chair of University Affairs Committee

· AS approved the survey questions that will be on the Spring 2015 election ballot and they allowed the election committee to spend $500 for raffle prizes. They also approved the handling of policy ballots.

·Recommended to transfer $151 to LGBTQA from Trans Awareness Week to Queer Prom.

· To approve the constitution of CSUN Chemistry and Biochemistry Club.

· The senate board notified people that today is the last day to sign up for AS elections and informed people that the two voting booths will be located on Matador Walk and on the Oviatt Lawn.

· Discussed the approval of the constitution of Big Brothers Big Sisters of Greater Los Angeles at CSUN.

· Also discussed approving another constitution of the Food Recovery Network at CSUN.