Dear Mr. Commissioner: Learn from the past 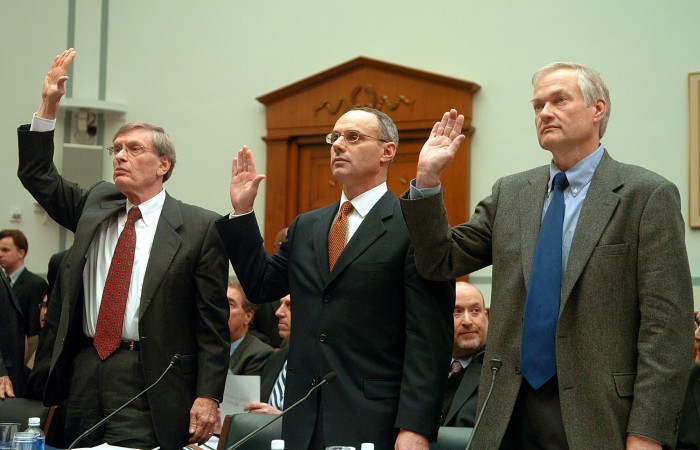 MLB Commissioner Robert Manfred (middle) has a long season ahead of him as the baseball season kicks off in just a few weeks. Photo courtesy of TNS

March is always a great time of the year for me. Down here in Los Angeles the weather is getting better, my allergies are starting to go away, and the boys of summer head to Arizona and Florida for the unofficial start to the baseball season.

It’s the best time of the year. A time for all of baseball to hit the reset button, and welcome an upcoming season of change and organizational growth. There were few changes bigger than the retirement of baseball’s second longest tenured commissioner in history, Allan Huber “Bud” Selig.

It shouldn’t be too hard to do a better job than Selig. For all his successes and all the praises he receives from owners, including navigating the dog fight that was the Mitchell report, increasing the league’s revenue total by almost 400 percent in his 22 years of service, the introduction of the wildcard rounds, and the merging of the American and National leagues, good ole’ Bud set you up for an uphill battle.

Selig wasn’t selected to be commissioner because he would stand tall in the face of adversity and corruption; he was selected because he was a former owner, and would look out for the interest of his fraternity.

He infamously ripped a franchise from Montreal once it became known that the owner would benefit financially from the move – a wound that has yet to heal for our neighbors up north. His blood lust for displacing fan bases unquenched, he tried to do the same to the Pilots and Twins before their cities stepped up and threw the law book at your former mentor. He was a damn near super villain to some fan bases – a nightmare waiting in the darkness to steal a team from a deserving city.

He allowed Jeffrey Loria, former owner of the Montreal Expos and benefactor of Selig’s owner-first mindset, to completely fleece the people of Miami of funds for a new stadium. After compiling what looked to be a competitive team of the future, Loria completely demolished the 2012 Marlins in a particularly Marlins like fashion, without a bat of an eye from the then Commissioner Emeritus.

The owners have gotten used to a cushy relationship with the commissioner’s office, and the current group of owners are going to want it to stay that way.

Be fair Commissioner Manfred. The league saw a record $9 billion revenue haul in 2014, and that number only looks to increase in 2015. Major League Baseball has a lot of change to play around with. We aren’t talking NFL money, but $9 billion isn’t chump change, and everyone is going to want their piece of the pie.

You have Mr. Tony Clark and the players union ready to sick their lawyers on you if the collective bargaining agreement negotiations, set to start in 2016, don’t end up in their favor. It’d be a shame for your tenure to begin by mimicking your predecessors most egregious mistake, the unfortunate 1994-95 baseball strike.

Don’t get me wrong Mr. Commissioner. I’m looking forward to seeing where your campaign to bring the youth back to the game ends up, and your proposed electrical renaissance will be a breath of fresh air compared to Selig’s almost ridiculous lack of technological knowledge.

Just don’t push the envelope too far. This is after all, a game of human error. Selig had far more failures than successes, but much like the ball players on the diamond: fail seven out of 10 times in your career, and you’re in the hall. You shouldn’t have too hard a time emulating that batting average.