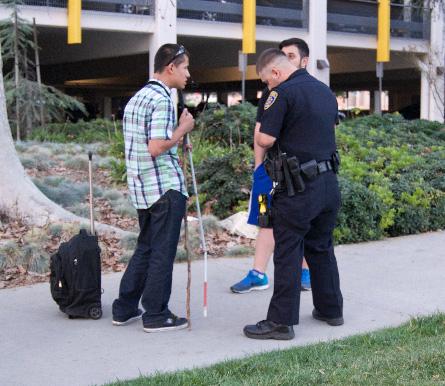 A CSUN student’s folding walking cane was broken by another man near the B5 parking lot on his way to class Monday.

Erick Gallegos, a computer science major, was walking to class when suddenly he felt pressure on his cane and it suddenly broke.

According to Gallegos he yelled at the person but didn’t get a response.

“I yelled ‘Hey! Hey! Hey!,’ he or she didn’t stop, that person just kept on going,” Gallegos said. “Two ladies told me they saw a man step on my cane and that’s when we called the cops.”

“He started yelling out, that’s when I came over,” Garen Gulmezian said.

Gulmezian reported what he saw to CSUN Department of Police Services Officer Wells.

Gulmezian first reported the incident to a police services van who then contacted CSUN police.

“The call indicated someone needed some assistance about a broken cane,” Wells said.

Last Wednesday Gallegos was involved in another incident where a car turned a corner and hit his cane, damaging it and the incident today involved his last cane.

After taking the report, Officer Wells escorted Gallegos to his class in his police car.