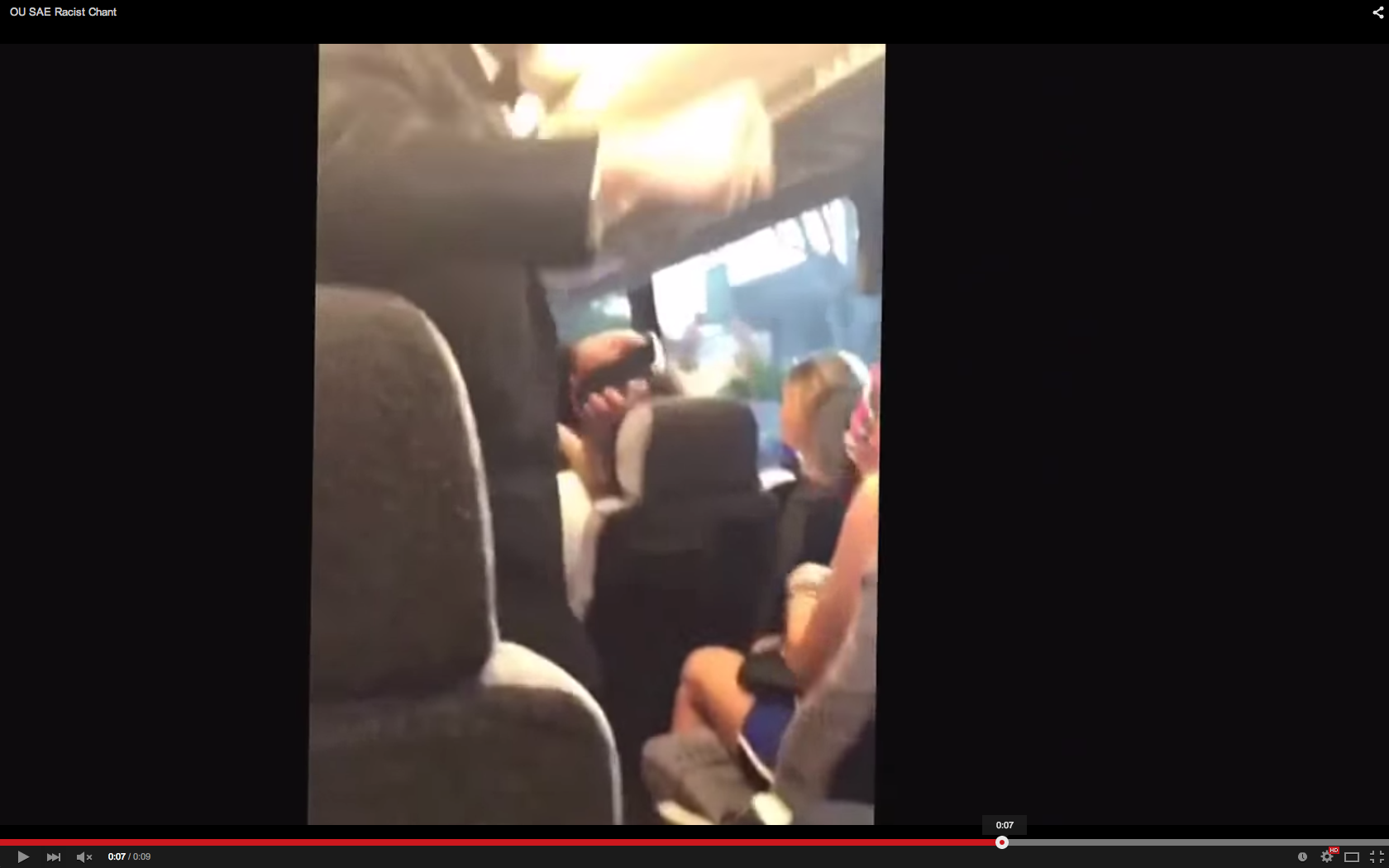 Oklahoma SAE members chanting racial slurs on the bus ride back from an event. (Photo taken from YouTube).

(TNS) Two unidentified students have been expelled for playing a “leadership role” in a racist chant by Sigma Alpha Epsilon fraternity brothers at the University of Oklahoma, the university’s president announced Tuesday.

“We will continue our investigation of all the students engaged in the singing of this chant,” University President David Boren said in a statement, justifying the expulsions on the grounds that the chant had created a hostile environment for other students. “Once their identities have been confirmed, they will be subject to appropriate disciplinary action.”

The expulsions were the latest fallout from a viral video that emerged Sunday night showing members of the SAE fraternity singing an anti-black chant.

Boren almost immediately banned the SAE fraternity from campus after the video showed members singing “you can hang ‘em from a tree” and “there will never be a (n-word) SAE” on a bus.

In his statement Tuesday morning, Boren said: “I have emphasized that there is zero tolerance for this kind of threatening racist behavior at the University of Oklahoma. I hope that the entire nation will join us in having zero tolerance of such racism when it raises its ugly head in other situations across our country.”

Boren praised the university’s response and added, “I hope that students involved in this incident will learn from this experience and realize that it is wrong to use words to hurt, threaten, and exclude other people.”

A black former member of SAE at the University of Oklahoma disowned the fraternity Tuesday.

“They are not my brothers,” William Bruce James II of Edmond, Okla., told CNN, adding, “They all got to go.”

Anonymous sources had sent the video to a black activist group on campus and the local student newspaper on Sunday, and punishment was swift. SAE’s national president, Brad Cohen, quickly said he was “shocked and disgusted” by the chant and also moved to cut ties with the local chapter.

Less than 24 hours after the video hit social media, officials had stripped SAE’s letters from their house and fraternity brothers were moving out their things to meet a midnight deadline, on the university president’s orders.

Possibly caught in the collateral damage was a black chef who worked for SAE, Howard Dixon. By Monday morning, an online fundraiser set up for Dixon had raised more than $40,000.

The university’s beloved football team, despite showing outrage Monday and participating in anti-racist demonstrations, was also hit: after a black four-star football recruit Jean Delance saw the video, he withdrew his commitment from the program.

Many black students on campus, while shocked by the video, said it confirmed their worst fears about the continued existence of racism at the university.

James, a member of SAE from 2001 to 2004, said he didn’t recall hearing the racist chant, versions of which have reportedly been heard at some other campuses across the South.

“They are wearing the same letters I wore … they have the same pin, the same symbol that I hold dear to my heart … and I don’t know what they have done with it,” James told CNN.