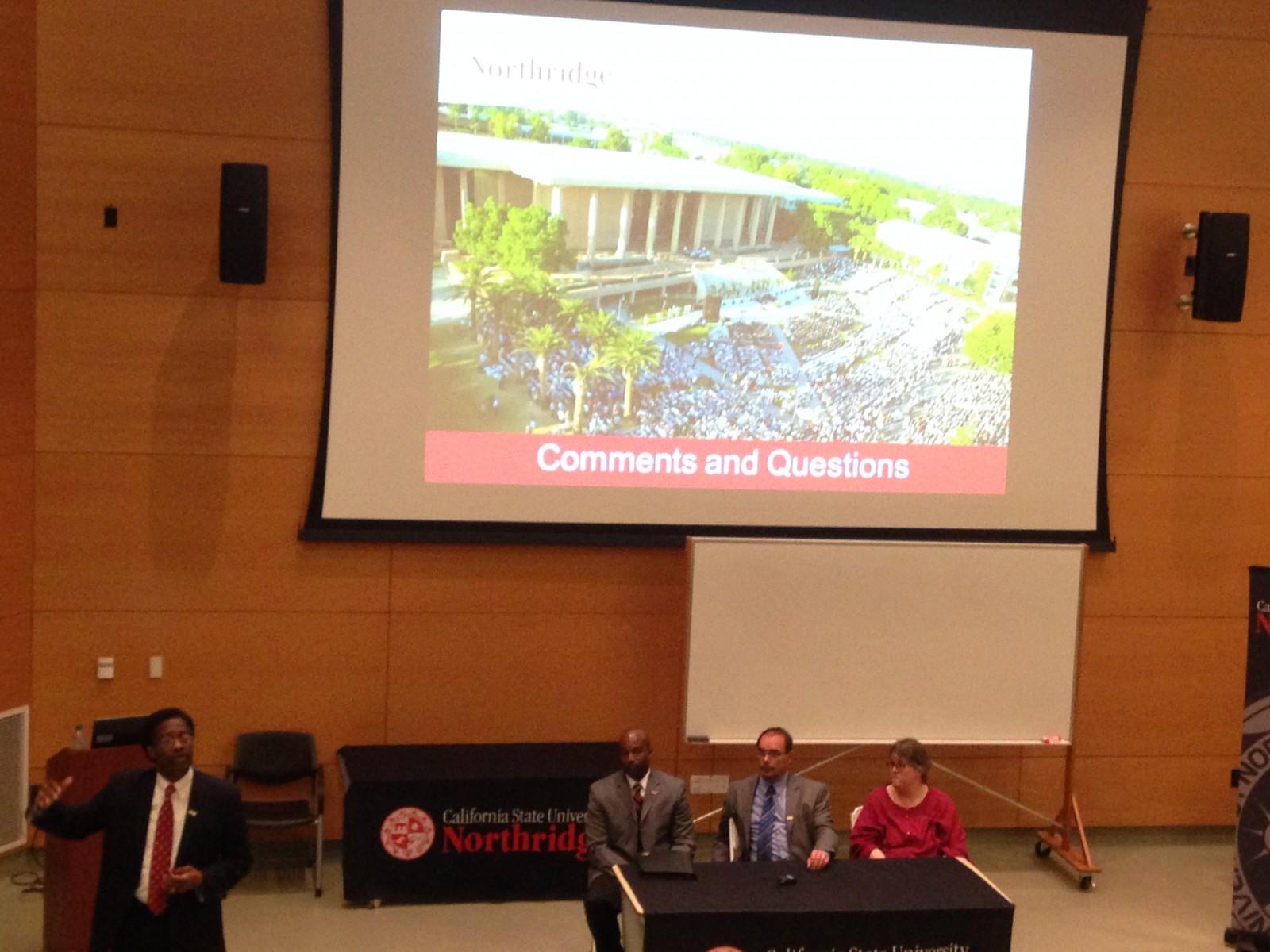 The final community public hearing on CSUN impaction was held at Moorpark College, and spoke to all of Ventura County and underrepresented schools in the area that would suffer from the proposal.

The meeting clarified what impaction was to the residents of Ventura County, as well as what it would do and whom it would affect. Ventura County has sent more students to CSUN in the past three years out of any county other than Los Angeles, according to CSUN’s Office of Institutional Research.

William Watkins, vice president for academic affairs, presented statistics and charts on the over-enrollment CSUN is currently facing. “We’ve got to talk about (impaction) in a very different way, otherwise we will not serve the youth of our community,” he said. Watkins again showed maps of the current local admissions area and what it would look like if the impaction plan was approved.

High school students from Ventura County would be most affected by the proposed impaction.

Watkins said high school students from Ventura County, would have an opportunity to attend CSUN if the major is not offered at CSU Channel Islands. “There’s quite an extensive list of majors we offer that Channel Islands does not,” he said.

Although CSUN President Dianne Harrison was not present, Watkins said she is just as concerned about the impaction issue as parents, administration and community college counselors.

“Some of us are doing what we dreamed of and that’s preparing kids to go to college, and there’s no place for them,” Watkins said. “There’s something pretty twisted about that.”

Watkins said CSUN was already impacted at the freshmen level, and is one of eight campuses not impacted at the transfer level, along with Bakersfield, Channel Islands, East Bay, Humboldt, Monterey Bay and Stanislaus.

Watkins said impaction wasn’t something CSUN “one day woke up and decided to do,” but that the lack of state funding versus the full-time enrollment students (FTES) ratio is growing over the chancellor’s office’s given number. The problem is all the schools in the LA basin area are impacted now.

Watkins presented both Phase I and Phase II of impaction, which would commence if approved. Phase I would consist of geographic changes to the local admissions area for first-time freshmen and an introduction of transfer student impaction. It would also impact four other majors.

Phase II will only be implemented if Phase I is not successful. This will result in an additional academic program impaction in the 2017-18 school year. Watkins said that CSUN hopes to never reach Phase II.

Currently, the three majors impacted are accounting, finance and financial planning. If impaction is approved by the Chancellor’s office it will take effect in fall 2016, and other majors that will be impacted would be psychology, kinesiology, music and cinema and television arts. This will raise GPAs and other criteria needed to get in.

Ventura County students pursuing a major that is not available at CSU Channel Islands will be treated as local area applicants.

Despite impaction concerns, CSUN will continue to admit Associate Degree for Transfer (ADT) students in the fall as well as in the spring as they have for the last few years, Elizabeth Adams, associate vice president for undergraduate studies, said.

All comments and concerns from Wednesday’s public hearing were recorded and will be shown to the Chancellor’s office on March 16.

During Monday’s impaction presentation at Glendale Community College, several questions were asked after the presentation, which Watkins mentioned.

“What if a student resides in the local area, but they’re attending a school outside of the local admissions area?” and “What do you do for a kid who’s homeschooled?” were some of the questions asked, Watkins said. Questions should be answered on CSUN’s website by March 12.

To view the proposed service area maps or to get more information about CSUN impaction visit csun.edu/impaction. Documents are available in both English and Spanish. Comments can also be  left on the website until March 13.