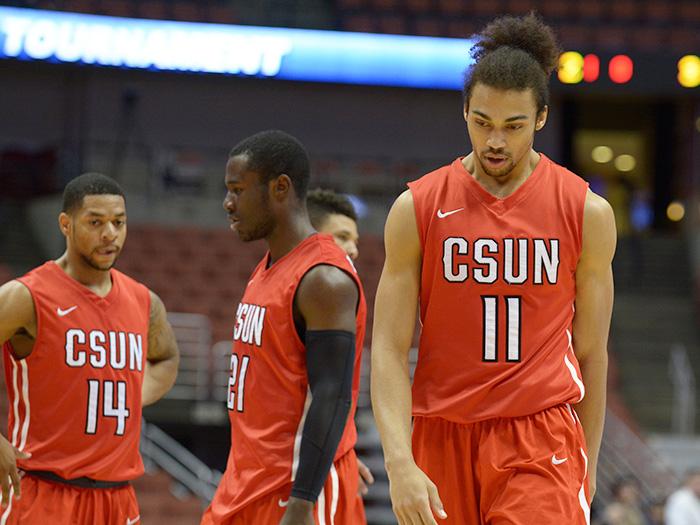 After leading at the half, the Matadors were not able to push against UC Davis' rally, losing 71-67 in the Big West Quarterfinals on March 12. (Raul Martinez / Staff Photographer)

This time, however, David could not finish off Goaliath, as the Matadors fell to the Aggies 71-67 in the quarterfinals of the Big West tournament, ending their season.

“For me it’s about the battle,” CSUN head coach Reggie Theus said. “There are certain things that have to happen in the game to win it. We didn’t do the things necessary to win it but the battle was a really great one on our part.”

After taking decisive control in the first half, and early parts of the second, the Matadors ran out of gas and faded at crucial points in the second half.

However, it looked like the Matadors were poised to end the Aggies’ season prematurely, as they forced them to play a methodical, interior-oriented game early on.

The Matadors were able to trap and crowd UC Davis shooters, as the Aggies shot 3-10 from the 3-point line in the first half, a far cry from the 45.4 percent rate they have shot this season.

In addition to their perimeter defense, the Matadors’ toughness and physicality began to surface in the form of senior forwards Stephan Hicks, Stephen Maxwell and Devonte Elliott. The trio combined for 21 points in the first half an as a result, the Matadors jumped out to an 11-point lead 14 minutes into the first half.

“I thought we did a great job with our game plan, we took away the things that we needed to take away,” Theus said. “Consequently, that’s what got us the lead.”

With their backs to the wall, senior forward Josh Ritchart went on a personal 5-0 run to pull the Aggies within six.

But as he has done so many times this season, sophomore guard Aaron Parks displayed the leadership and toughness on both ends of the floor, as he stole the ball and finished in transition to give the Matadors the much-needed momentum to extend the lead to 10.

“He’s a guy that defensively does a great job, offensively, he’s always seeking contact,” Theus said of Parks. “So the style of play for him was perfect.”

Towards the end of the first half, the Matadors became cavalier with the ball, allowing the Aggies to pull within four.

Despite their carelessness, the Matadors scored four points in the final 10 seconds, highlighted by a Stephen Maxwell dunk moments before the buzzer sounded to put them up 36-28 at halftime.

After stealing the momentum before the half, the Matadors kept their foot on the gas, as Stephan Hicks stole the ball on Davis’s opening possession and finished with a dunk on the other end.

Hicks’s dunk ignited CSUN as they eventually pushed their lead to double figures again at 17:54 mark.

Nevertheless, fatigue began to take its toll on the Matadors, just as it has countless times this season.

“I start resting my guys with my timeouts,” Theus said “It’s not about strategy. It’s about getting these guys some rest”

Consequently, the Matadors struggled earning position and holding onto the ball on offense, as evidenced by their 12 second half turnovers.

To compound their inept offensive production, the Matadors also lost track of multiple Aggies’ shooters late in the second half.

“In the first half I felt like we were focused on the game plan,” Maxwell said. “But in the second half we made too many mistakes on the defensive end.”

With the game tied after 54, UC Davis was able to get their first lead of the game after what looked like a 30-foot 3-pointer from senior guard Tyler Les.

“If he’s got a little bit of a window, he’s gonna shoot it and shoot it with confidence, and live with the consequences,” UC Davis head coach Jim Les said regarding Tyler Les.

From that point on, the Aggies continued to cash in on CSUN miscues, as they regained their confidence shooting, stretching the lead to as much as nine.

“If you make a mistake, they’re (UC Davis) very good at making you pay for it,” Theus said.

A furious rally in which the Matadors scored five points in under five seconds, gave them a sliver of hope late, but the Matadors could not force turnovers on the other end, and were forced to send the Aggies to the free throw line, where they iced the game.

“It hurts to know this is a game that we could’ve won,” Theus said. “It hurts because it’s something that my seniors, who have fought really hard this year and gone through a lot of things—it’s unfortunate that this has happened on their watch.”

In spite of the loss, Theus believes that with a complete team, this game, and season, would have been different.

“It’s exciting to think about where we could’ve been,” Theus said. “If we had all our players at any particular time,” Theus said.

Although there are a lot of “what-ifs” that surround this game and season, Theus will not dwell on it, as he is optimistic about where CSUN is trending toward.

Regardless of the program’s believed upward trajectory, a lot of credit must be given to this group of players, particularly the seniors.

“Out of all my years of coaching, whether it be the NBA or college, this is one of the greatest groups of individuals I’ve ever been around,” Theus said.