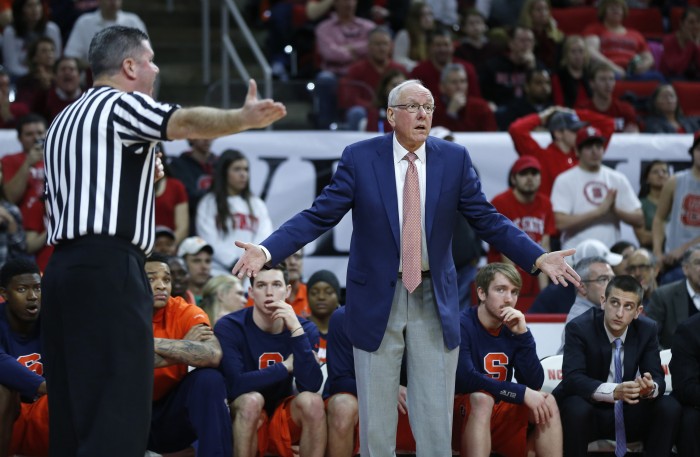 Syracuse’s Jim Boeheim was on the verge of joining Mike Krzyzewski in the 1,000 wins club, but must now vacate 108 wins due to sanctions handed down by the NCAA.

Including the vacated wins, Syracuse was given five years probation, loss of 12 scholarships and Boeheim will be suspended nine ACC conference games next year.

Also, the NCAA accepted the University’s compliance to not participate in any postseason activities this year. No ACC or NCAA tournament for the perennial powerhouse.

The NCAA violations were reported by Syracuse University and included multiple infractions dating back as far as 2001.

The NCAA released a statement which said,” Over the course of a decade, Syracuse University did not control and monitor its athletic programs, and its head men’s basketball coach failed to monitor his program.” per The Associated Press.

The sanctions by the NCAA were swift, but the investigation was a long and grueling process.

This investigation has been ongoing for years and the ruling has now put the Syracuse Basketball program in a bleak position for the near future.

Boeheim, who has coached at Syracuse since 1962 doesn’t plan on relinquishing his post as head coach. After Sunday’s season-ending loss to North Carolina State, Boeheim said,” I’m not going anywhere,” according to ESPN, per the AP.

He’s respected throughout college basketball for his decades of commitment and contributions and recently, colleagues like Krzyzewski have come to his defense.

With the sanctions finally given to Syracuse, there is one question being floated around: Is Boeheim’s legacy tarnished?

I don’t believe his legacy is tarnished because we’re talking about a Hall-of-Fame coach who has displayed decades of coaching consistency, but the obvious lack of awareness and monitoring of his program is undeniably alarming.

This is a clear stain in terms of provisional perception for the Hall-of-Fame coach.

The question we should be asking is, how long will it take Syracuse to recover from this fall from prominence?

I guess, this is something we will just have to wait and see.