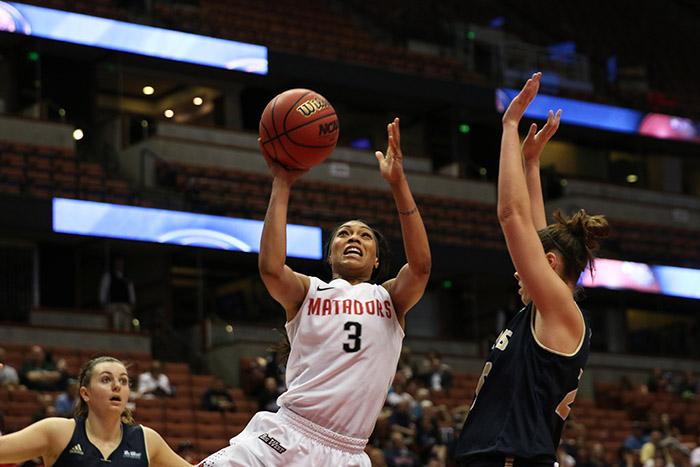 Senior Janae Sharpe fights her way up to the basket for the Matadors in their semifinal game against UC Davis on March 13. The Matadors defeated the Aggies 61-47. (Trevor Stamp / Multimedia Editor)

There was last year when CSUN put down a team at the Big West Tournament semifinals for the first time in the season. And then there was this year, when they did it again.

“Obviously we knew it was going to be a challenge,” said CSUN head coach Jason Flowers, who acknowledged the irony of the semifinal game.

Davis proved troublesome for the last-year’s all-around conference champs this season, despite being a lower-seeded team.

Davis seeded fifth in the tournament and kicked out the University of California, Irvine in 80-71 the first round March 10. The following day, they took out the once formidable California State University, Long Beach 70-67.

But CSUN was the trouble team’s final stop for the season.

Stubborn woman-to-woman defense from the Matadors kept the University of California, Davis Aggies corralled during the first half of the Big West Tournament semi-final game.

The defense plan worked to the point of working Salvatore into a corner and leaving her with no other option than to throw away the ball to avoid a five-second violation.

In other instances, they drove her to the back court. CSUN’s man-to-man full-court press kept Davis outside the arc and unable to drive.

CSUN offensively struggled against the high-risers Davis setup in the key and CSUN’s little guards like Ashlee Guay had trouble with the drives. 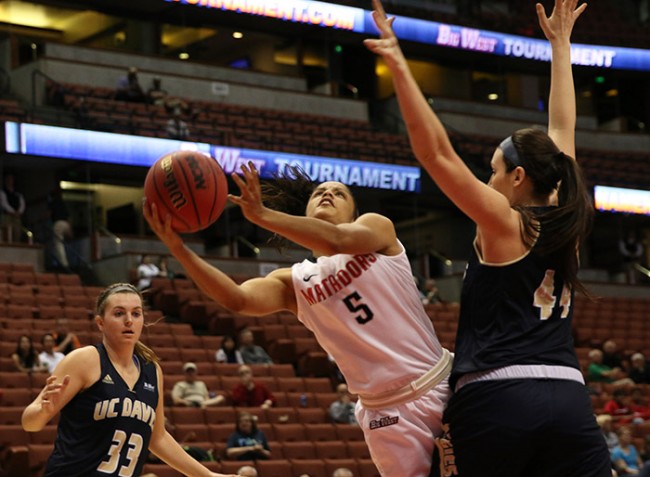 “My heart was there in it but I was playing too fast,” Guay said. “It doesn’t matter, it’s not a one person game.”

In the second half, Davis managed to work their way into the key and close in on CSUN.

So in response, CSUN brought in the artillery that saw threes from Guay, Cinnamon Lister, and forward Randi Friess.

CSUN’s biggest problem was keeping Davis from retrieving the rebounds and making good off them. Davis brought no long game, despite being one of the best three teams in the conference, and wasn’t deadly from anywhere outside of the arc. When they could chisel themselves in the key and hand it off to the six-foot-three-inch center Alyson Doherty or pass to one of their tall forwards — CSUN felt it.

“Everywhere we looked, there was two of them,” UC Davis head coach Jennifer Gross said.

But despite the push from Davis, they couldn’t manage to adapt to CSUN’s adaptation. In a last ditch effort, Davis initiated a full-court press in the final few minutes, but it couldn’t prevent the inevitable.

“I think our team this week just showed a lot of Aggie Pride.” UC Davis forward Salvatore said. “I think that we really competed.”

The win put the Matadors at an eight-game winning streak and less than a day away from facing the toughest team in the conference.

“There won’t be any excuses for our group tomorrow,” Flowers said.

CSUN will face the University of Hawai’i Saturday in the final game of the tournament.

Hawai’i has proven no laxing matter over the season. They took an initial hit to CSUN, and California State Polytechnic University, San Luis Obispo in the first two conference games of the season, but maintained a consistent winning streak since then.

With the semi-final victory over Fullerton Friday afternoon they solidified their shot at the Big Dance.

CSUN and Hawai’i will face off for the final time this season Saturday 3 p.m. at the Honda Center in Anaheim.

“We’ve been preparing all year for this game,” CSUN senior center Camille Mahlknecht said. “We’re ready for tomorrow, just going to be the same intensity and team effort as today.”