Shut up and walk the Palladium stage 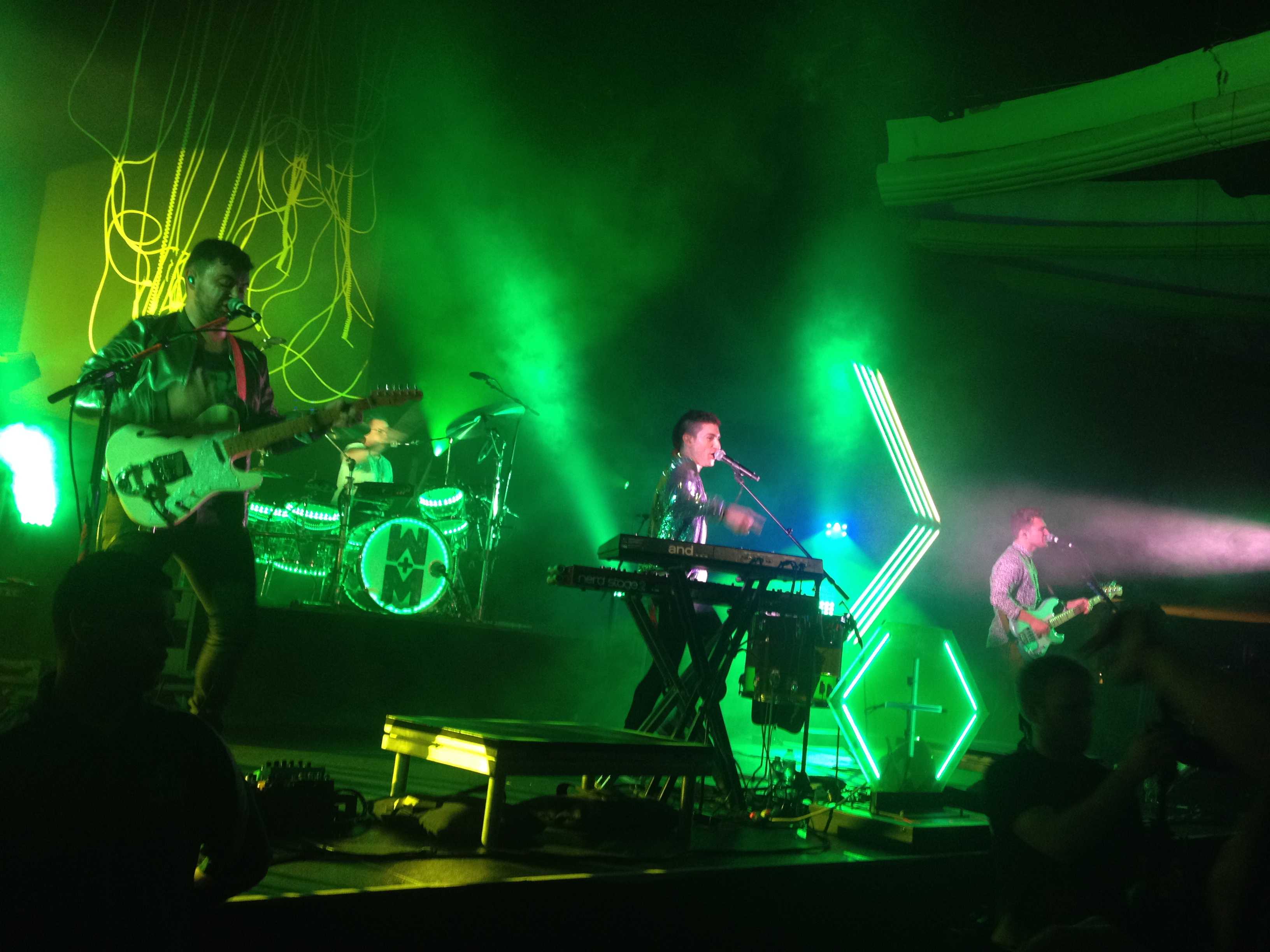 The entire band harmonizes during one of their songs at the Hollywood Palladium on March 12. Photo credit: Cicely Chisholm

If dancing, synth-pop-rock and face paint sounds like your kind of night, Walk the Moon might need to be put on your list of bands to see before you die.

The Ohio natives rocked a sold out Hollywood Palladium show on March 12 and didn’t disappoint their legion of fans.

As soon as the lights started to dim for their set, the energy in the crowd was buzzing. Very slowly, people were crowding closer and closer to the stage until the lights finally went out and the “Lion King” song “Circle of Life” came on.

The quartet walked onstage with paint on their faces, and launched into the song “Different Colors,” setting the mood for the rest of the night.

The stage decorations were two angle brackets on either side of the band that seemed to coincide with drummer Sean Waugaman’s clear set, which was accented by lights around the edges.

The band surprised attendees by breaking into a cover of The Killers’ “All These Things that I’ve Done,” getting what seemed like the entire venue to chant the extended refrain “I’ve got soul but I’m not a soldier.”

Though mostly playing music to dance to, like “Lisa Baby,” “Up 2 U” and “Tightrope,” the band did slow it down for three of the 16-song set.

The main gripe I had was the okay stage presence in the beginning. During the first fourth of the set, the members didn’t seem to have the energy needed for the large crowd. To be fair, lead singer and keyboardist Nicholas Petricca is stuck behind his instrument, which leaves little room for the front man to interact with the fans.

When the singer did step back to dance or play a tambourine, things felt more upbeat and just better, to put it simply. At one point near the end of the show, he stood on the barricade and was kind of pulled into a screaming and grab-happy crowd.

Most of the fans seemed to eat up anything the members did, which included whistling when Petricca rubbed his hands over his body or screaming when guitarist Eli Maiman would do a solo.

Things got intense during their two biggest singles “Shut Up and Dance” and “Ana Sun.” The thousands of fans in attendance were almost deafening with their singing. It seemed like there wasn’t a soul in the place who wasn’t dancing or at least jumping during the songs.

It was easy to tell how much the band enjoys playing music though. When the ballad “Aquaman” come on during their encore, Petricca took out his earplugs while the entire crowd was singing, as if to hear them better.

Maiman and bassist Kevin Ray worked their respective sides of the crowd, constantly smiling while the songs were being sung back to them.

The entire show was fun, made even better by opening band The Griswolds. The Australian natives helped get the crowd in the mood with their music that seemed like it was impossible to be sad while listening to it. “Down and Out” in particular was a favorite of mine.

By the end of the show, everyone seemed to be sweating and out of breath, with some fans’ face paint streaking or practically wiped off.

Walk the Moon will continue its “Talking is Hard” tour into early May, though most shows are sold out.

If they sound like your type of band, give them a listen through either Spotify or YouTube.