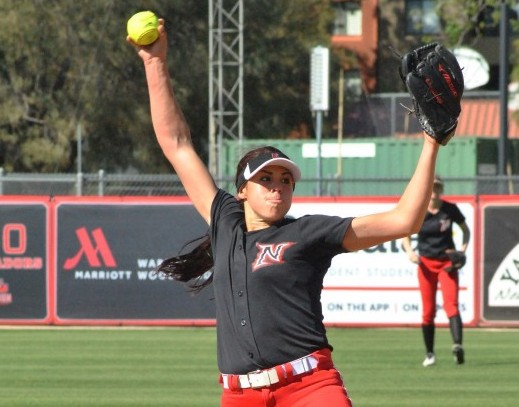 Four runs proved to be all the Matadors (20-7) needed to pick up the 4-1 win over the visiting Buffalo University Bulls (5-12) on a bright and sunny Friday afternoon at the Matador Diamond.

Sauceda, who tossed 3.2 innings on Thursday, was called to the hill again today to baffle the Buffalo batters. Sauceda sent a career-high 11 Bulls back to the dugout on strikes and allowed 6 hits in the complete game victory. She was awarded her second win of the season.

Sophomore left fielder Katie Hooper, who has bounced around from catcher, to corner infielder, to outfielder depending on what Coach Tairia Flowers seems to need at that given moment, has jumped off to a tremendous start this season. Hooper has driven home at least one RBI in nine of her last 10 games, including a second inning RBI single off of Buffalo’s freshman starting pitcher Charlotte Miller.

Miller, who was 9-4 coming into today’s contest was awarded the complete game loss. Miller gave up 11 hits to CSUN batters, walking two and only managing to fan a single Matador.

The Bull’s lone run of the game came courtesy of a second inning home run by junior third baseman Hayley Barrow. It was her sixth home run of the season.

The California State Northridge Tournament will continue for both teams tomorrow as the Bulls hope to strike a bit of revenge against the host Matadors. The first pitch is scheduled for 4 pm at the Matador Diamond. The last game of the weekend tournament for Northridge will start at 2 pm on Sunday against the Colorado State University Rams (15-12).