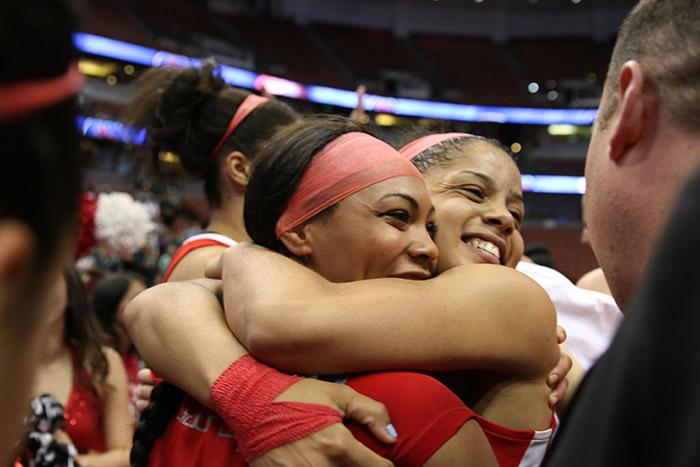 Seniors Janae Sharpe (left) and Ashlee Guay embrace after the Matadors win the Big West Championship for a second year in a row on March 14. (Trevor Stamp / Multimedia Editor)

Though they lost the outright championship title to the Hawai’i Rainbow Wahine this season, they managed to take the Big West Tournament away from them Saturday night 67-60 at the Honda Center in Anaheim.

“Through the thick and the thin, these young woman did what they were supposed to do,” CSUN head coach Jason Flowers said.

This tournament victory marks the second year in a row for the San Fernando Valley basketball team, and their second trip to the Big Dance. But it didn’t come easy.

Hawai’i, until Saturday, hadn’t lost a game in two months, and CSUN treated them with such respect.

The first half was an all out battle determined by both teams’ big guns in the paint. Hawai’i held the advantage, with noticeable tall, athletic players that made it difficult for CSUN to drive.

The Island team was just too tall for CSUN’s primary scorers and Hawai’i was literally slapping any attacks down.

The Rainbow Wahine’s Shawna-Lei Kuehu was no joke inside the paint. She slapped down CSUN’s guard Janae Sharpe numerous times in the first half, but Flowers persisted despite the nine single-half blocks obtained by Hawai’i.

But CSUN knew this coming in. In practice, CSUN prepared by setting up a tennis racket to simulate block shots.

“Honestly I hate it cause I get my shot blocked every time,” said CSUN senior guard Janae Sharpe, in context to the practice technique.

Flower’s countered the Hawaii’s height by placing several six-foot-plus tall players on the court at the same time to counter. But center’s like Camille Mahlknecht and freshman Tessa Boagni, didn’t have the athleticism to put points on the scoreboard.

Hawai’i on the other hand, was working with versatile players that not only towered above defenders in the paint, but slapped looks away from CSUN.

To answer the wall that Hawai’i had placed in the key, Flowers brought out his wing shooters but Hawai’i wasn’t stupid.

CSUN only pulled 5 threes for the game, and had to work for every single one as Hawai’i didn’t counter with a full-court press defensively, but instead relied on their height to deflect shots from within and outside the arc.

Offensively, the Rainbow Wahine worked within the arc, using their height and their speed to work over the smaller defenders. So in response, CSUN packed the key under the basket to make it harder for Hawai’i to climb when passing the ball over a defender’s head.

Northridge, being the scrappy energetic team who gave the top-seeded University of Southern Carolina a run for it’s money last year in the first round of the NCAA — found a way.

“Their guard play is phenomenal,” Hawai’i head coach Laura Beeman said. “Very difficult to handle three guards who know how to do what they do.”

And at around 5 p.m. Saturday night, Hawai’i was handed their first loss since Jan. 10 — from the same team.

“Honestly this one hurts.” Hawaii’s Kuehu said. “It’s going to take some time for these wounds to heal.”

Hawai’i had forged a solid season coming from their last loss Jan. 10 against CSUN 53-46 at the Matadome.

From that loss Hawai’i went to rack up 15 consecutive wins. On the other hand, CSUN was trying figure out what kind team they were.

“Last year we bought into (Flowers) system and we bought into what we had to do,” CSUN senior guard Cinnamon Lister said. “One of the biggest challenges was re-buying into his system.”

Flowers had grown frustrated starting in December with the losses his team was taking and coming into the regular season conference play, switched up his starters and tried to figure out what he was working with.

“We struggled a lot throughout this season,” CSUN’s Guay said. “We were trying to figure out what was missing.

Somewhere along the line, CSUN got their groove back and racked up seven-straight wins going into the tournament, but this was nothing to what Hawai’i had been doing.

The Island team stood 14-2 at the start of the tournament, and then went on to put the California State University, Fullerton down 73-64 in the semifinals.

A few hours later, CSUN faced off against the University of California, Davis, a team that stood undefeated for Northridge, and put them down 61-47.

Then the two top teams in the regular season faced off — and last year’s champs went home this year’s champs.

“I definitely feel that their pressure was more intense.” Beeman said. “We really picked a bad night to not hit layups.”

Now CSUN will have to put their experience to the test again when they head to the first round of the NCAA tournament. Maybe this is the year they will make it past the first round.

“This is the best team in school history,” Flowers said.

For a live feed, swing by @LasinJulius and @sundialports57, or refresh for updates.