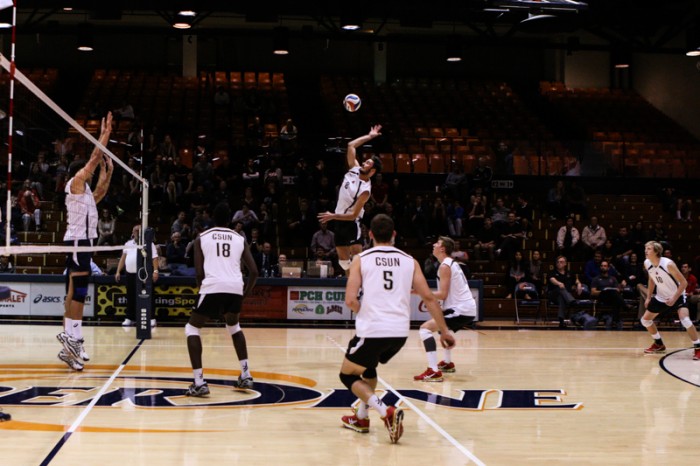 Still missing from the Matadors’ lineup is junior outside hitter Sam Holt. The offensive leader fell to injury late in the match against Hawai’i on Feb. 22, and has yet to return to the court. To make up for this loss, senior middle back Greg Faulkner, sophomore opposite hitter Jakub Ciesla and senior outside hitter Kyle Stevenson have stepped up their game.

In the last two matches Ciesla has had 24 kills while against Harvard getting a career-high 17 (.229). Faulkner has added 14 blocks total and Stevenson had 11 digs against Harvard.

After sitting out the match against UCLA, senior setter Travis Magorien returned to the court with 43 assists against Harvard and 20 against Penn State.

The first match ended in just three sets with the Matadors hitting .118. It was five point runs in both the first and second sets that gave Penn State the lead they needed to win. Penn State allowed the Matadors to get within four at 17-13, but no closer after that and took the set and match.

Against Harvard CSUN hit .250, playing four sets, giving one to their opponent. A significant lead early on in the first set propelled the Matadors to victory, while kills from Faulkner and Ciesla followed by hitting errors from Harvard pushed CSUN past a tied 10-10 score in the second set. From this point on, the Matadors only saw victory. However, Penn State fought back and took the third set, but hitting .314, the Matadors showed no mercy and took set four and the match.

CSUN returns to the Matadome to take on USC and open a four-home-game series on March 18 at 7 p.m.