Men’s Volleyball: CSUN look to build on momentum against No. 5 USC 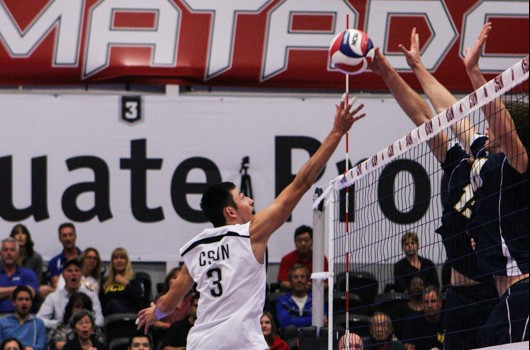 CSUN looks to get back to their winning stride and continue their momentum after breaking their eight-game losing streak against Harvard.

The Matadors return home to face the No. 5 USC Trojans after a six-match road trip. Upon returning home, CSUN broke their eight-game losing streak with a victory over Harvard in Long Beach State’s Asics Tournament this past weekend.

When victory finally returned for the Matadors, it was with a vengeance. With ten blocks and a career-high 13 kills (.579), senior middle back Greg Faulkner earned an all-tournament selection while leading his team to victory. Also setting new career-high standards was Jakub Ciesla. The sophomore opposite hitter set a new standard for himself with 17 kills while hitting .229 on 48 swings, another career-high. The Matadors as a whole hit .250 with 50 kills and took all but one set from Harvard.

However, during their mid-season struggle, CSUN lost their offensive leader, junior outside hitter, Sam Holt. Injured during the fourth set against the University of Hawai’i (Feb. 22), Holt has yet to return to the court. Senior setter Travis Magorien also spent some time off the court, not playing against UCLA because of injury. Both are vital assets to the team and both do appear in the probable lineup released by gomatadors.com for the upcoming MPSF game against USC.

The Trojans (11-6, 9-5 MPSF) are coming off of a 3-1 victory over the Midwestern Intercollegiate Volleyball Association’s Lindenwood, an NCAA Division II school from St. Charles, MO. USC started the season with an eight-match winning streak, it took the No. 7 Hawai’i Rainbow Warriors to stop them.

The last time the Matadors and Trojans faced each other, the Trojans took the match with ease. USC out hit the Matadors .543 to .224, had six blocks to the Matadors’ three, had three times as many aces (6 to 2) and 24 digs to the Matadors’ 16. In all three sets, USC got a strong lead early on and kept it with CSUN unable to catch up.

The Trojans have a 4-3 away record, while the Matadors have a 3-3 home record. As of March 14, USC is ranked fifth in the MPSF and the Matadors tenth.

Game time is 7 p.m. Wednesday March 18 in the Matadome.