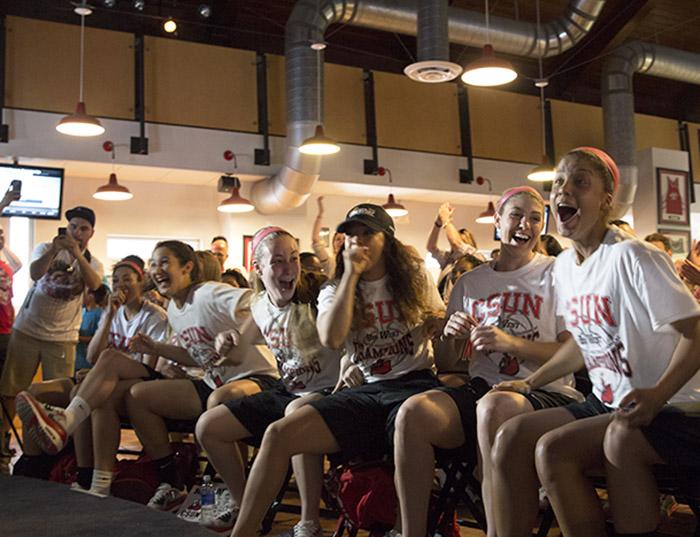 The women's basketball team reacts after learning they were selected as a No. 13 seed in the Oklahoma City Region bracket, and will face the No. 4 Stanford Cardinals in the first round of the Women's 2015 NCAA Tournmanet, on March 16 in the Pub. (Trevor Stamp / Multimedia Editor)

After repeating as Big West Tournament champions, the Matadors discovered that they were going to be a 13 seed in the NCAA tournament and will be facing the no. 4 seeded Stanford Cardinal in Palo Alto on Saturday.

“This is a good opportunity for us to show who we are and what we represent,” senior guard Janae Sharpe said. “And that’s CSUN.”

“We’re really ready to make an impact this year, last year we were happy to be there more excited for the experience, “ senior center Camille Mahlknecht. “Now we’re ready to really play.”

A matchup with Stanford signals the fourth time in seven years that a Big West team has been pitted against Stanford in the first round. Both teams enter the game with nine losses, but Stanford has one more win than CSUN (24).

From a strategic standpoint, the Matadors plan on doing what they’ve done all year, which is to play wreak havoc on defense and get out on the break.

“Obviously we’re going to have to limit them,” CSUN head coach Jason Flowers said. “And then offensively we just want to do what we do, we’re a team that gets out and runs and we’re going to attack.”

Despite Stanford’s substantial height advantage—the Cardinal have 10 players over six-feet—Flowers does not plan on succumbing to their height or style of play.

“Their size can be an advantage on one hand, and we’ll have some things that we’ll have an advantage at,” Flowers said. “And so I think it’s just a matter of which team can play to their strengths and avoid their weaknesses.”

Looking ahead, the Matadors will rely on their five program-changing senior starters to guide them to an upset of the Palo Alto-based program.

“The five seniors have been phenomenal and instrumental to the success of our program,” Flowers said. “They’ve changed the perception of our program.”