Women’s basketball: On to the Next One 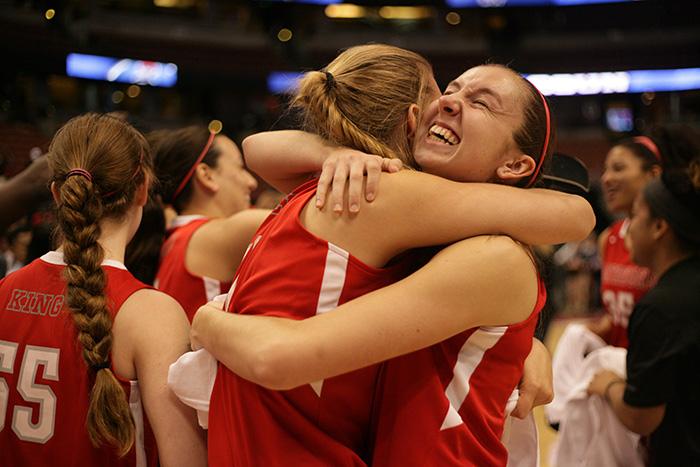 CSUN managed to book a ticket to the big dance a second year in a row with their victory over the University of Hawai’i 67-60 Saturday night, despite losing the regular season to them this year.

“This is a good opportunity for us to show who we are,” CSUN senior guard Janae Sharpe said. “We’re going to go out there and work hard.”

Northridge has moved up in the ranks this year and secured the No. 13 seed in the NCAA tournament , an improvement from last year’s bitter-sweet No. 16 seed.

This victory marks the second year the San Fernando Valley team has secured the conference and moved on to the NCAA tournament, but it didn’t come easy.

The Matadors broke into the season with a six-game-winning streak before giving it up to Saint Mary’s College Dec. 4, and fluttered in and out of victory for the next couple of months.

Head coach Jason Flowers, coming in conference play earlier this season, had grown frustrated with the losses and switched up his starters, trying to figure out what he was working with.

“We struggled a lot throughout this season,” CSUN’s Guay said. “We were trying to figure out what was missing.

Somewhere along the line, CSUN got their groove back and racked up seven-straight wins going into the tournament, but this was nothing to what Hawai’i had been doing.

The Island team stood 14-2 at the start of the tournament, and then went on to put the California State University, Fullerton down 73-64 in the semifinals.

A few hours later, CSUN faced off against the University of California, Davis, a team that stood undefeated for Northridge, and put them down 61-47.

CSUN delivered the first defeat to a team that hadn’t lost in 15 games the very next day.

Despite facing a team that boasted tall and swift players that could not only put down offensively, but shut down defensively as well, CSUN prevailed.

“Their guard play is phenomenal,” Hawai’i head coach Laura Beeman said. “Very difficult to handle three guards who know how to do what they do.”

Now CSUN will have to put their experience to the test again when they head to the first round of the NCAA tournament against a legacy team.

“Last year it was just raw emotion,” Flowers said. “This year I think it was more subdued and controlled because this team has set higher goals.”

Stanford, playing in the Pac-12 conference, secured a 24-9 record this season, to CSUN’s 23-9 and they have dominated their conference for the past couple of years.

CSUN will have either have to adapt to a play style or enforce their’s to beat the big name school on the national stage Friday.

But CSUN isn’t discouraged with facing a big team like Stanford. Last year was a tough situation but a good lesson.

The University of South Carolina shutdown CSUN  73-58 in the first round of the tournament last year in Seattle.

They gave a good fight, but the notably more experienced Southeastern Conference team was literally too tall for CSUN’s guards.

Hawai’i shared a similar setup, but CSUN had prepared themselves well enough to counter what the Island team threw at them.

“They do have size but it’s a different kind of size,” Flowers said. “Their style of play is completely different than Hawaii’s.”

CSUN’s Sharpe said her team will enter the Maples Pavillion in Stanford ready to compete.

“We’re going to continue to attack,” Sharpe said. “We’re not going to let their big players discourage us.”

CSUN will face off against Stanford at the opposing team’s home court and give their second dance on the big stage March 21.

“I think their mindset is completely different than last year,” Flowers said. “We play a different style now.”