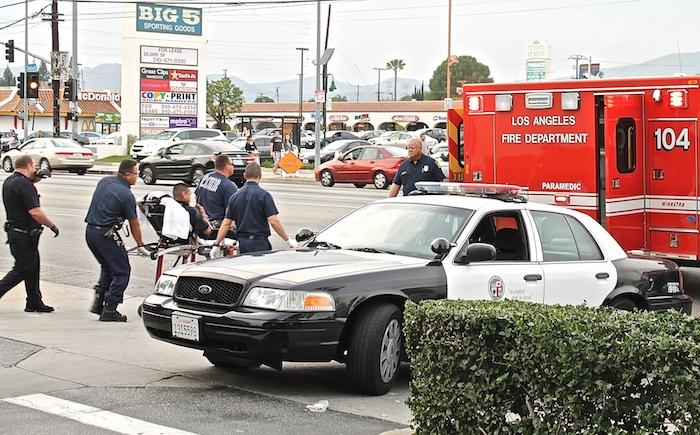 Officers load suspect into fire truck after police pursuit from Sherwood Forrest to the intersection of Reseda Boulevard and Nordhoff Street on March 17. Leni Maiai/Sundial Contributor

A suspect led Los Angeles Police Department officers on a pursuit from Sherwood Forest to the intersection of Reseda Boulevard on Tuesday afternoon.

Officer Chris Raul of the LAPD said that the driver was wanted for armed assault and refused to pull over when initially prompted.

Mike P., a witness to the pursuit, said “I saw them driving erratically in (Sherwood Forest) and called the cops 30 minutes afterward.”

The car was described as a black Silverado with a circular crack in the windshield.

According to Officer Scott from the Los Angeles Police Department, the driver was arrested on the scene and was possibly armed. Inside the suspect’s vehicle was a 20-year-old woman who was later placed in an ambulance for reasons that are not yet known

Scott said that this was not a high-speed chase, but a pursuit. A search of the vehicle has been completed by the LAPD.

Betsy Belle Camacho and Madeline Sensibile contributed to this report.